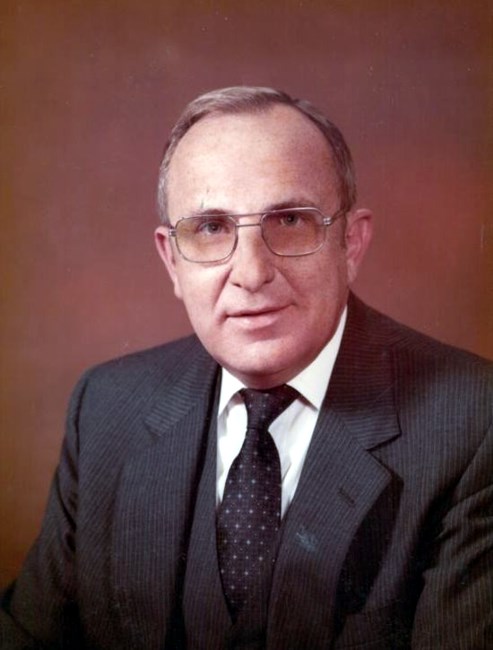 Earl David Goldsmith, 87, of The Woodlands, Texas passed away on Tuesday, March 6, 2018. Services will be held on Monday, March 12, 2018 at Forest Park Funeral Home in The Woodlands at 11:00 AM with burial and reception immediately following. The service will be preceded by a visitation from 10:00-11:00 AM. Earl was born in Henryetta, Oklahoma on May 20, 1930 to Earl and Juanita (Burr) Goldsmith. He graduated from Henryetta High School on his 18th birthday. Earl married Wilma Jean Wilmoth on August 19, 1950 and together they had two daughters. They later divorced. Earl married Donna Marie Earnshaw on August 3rd, 1979. Her daughters became his, making a total of four sisters. After earning a Bachelor of Commercial Science degree from Oklahoma’s School of Accountancy in 1951, his further studies were interrupted when he was drafted into the US Army in 1952. Earl advanced to the rank of Sergeant and served at Camp Rucker, AL and Ft. Benning, GA. Determined to become a CPA, Earl studied independently while in the military and was the proud recipient of the Gold Medal which is awarded to the Oklahoma CPA candidate earning the highest score on the three-day exam. Earl enjoyed a notable career in Public Accounting. Having joined Warner & Godfrey in Tulsa in 1950, he returned to the firm after serving in the military and quickly advanced to partner before the firm merged with Arthur Young & Company. He moved to become the managing partner of the Wichita office and later transferred to Kansas City where he was the partner in charge of audit. In 1982 Earl transferred to the Houston office where he served as audit partner and in a technical advisory role on complex audit and accountancy issues on both a local and national level until his retirement in 1988. Earl then embarked on a second career with McGladrey & Pullen in Minneapolis, MN from 1988 through his final retirement in 1996. Earl and Donna returned to Houston and have resided in The Woodlands ever since. Earl, who had an insatiable desire to learn, was an amateur historian whose passions included World War I, World War II, the Civil War, The University of Oklahoma Football, and his beloved hometown of Henryetta, OK. He and his two sisters grew up in a special time in a special place and he never tired of telling wonderful stories of his youth. Determined to stay connected with his high school classmates, Earl kept everyone up to date with his monthly newsletter and helped coordinate class reunions. In recent years Earl also wrote a series of articles for the Henryetta newspaper recounting notable stories from growing up in Henryetta and has worked closely with the Henryetta Historical Society. Since his retirement, Earl focused much of his energy on The Spirit of the American Doughboy, a sculpture by E. M. Viquesney designed to honor the veterans and casualties of World War I, one of which stood in the middle of the main intersection of his hometown. Ultimately, Earl visited many of the doughboy statues around the country and helped develop an extensive database surrounding the topic. Raised in the Christian Church and an active member throughout his life, Earl served as Chairman of the Board and was recognized as “Man of the Year” by East Side Christian Church in Tulsa, OK in 1972. He was an active member of the AICPA as well as several State Societies of CPA’s. In his retirement, Earl also participated in leisure learning at the local college, led talks at a Civil War roundtable and loved having “lunch with the guys” every other Tuesday. But Earl’s true gift was simply being a wonderful grandfather to his 9 grandchildren and 1 great-grandchild. He could keep them riveted for hours with his clever stories, riddles, silly poems and endless scores of Oklahoma football games from the 1940’s to current day. Whether it was a day at the zoo, a routine visit to the donut shop, a birthday greeting or just quick visit, Grandpa “Bucko” was certain to make it extra special. Earl is survived by his wife of 38 years, Donna Marie Goldsmith; one sister, Dora Jane Goldsmith Pickel (Lloyd) of Poteau, OK; four daughters, Linda McBeth (Jeff) of Mankato, MN, Jennifer Ho, Topeka, KS, Julie Grantham of DeSoto, KS, Jana McCarver (Paul) of Spring; nine grandchildren, Kevin McBeth of Minneapolis, MN, Melissa McBeth of Mankato, MN, Allison Groenewold Ho (Justin Groenewold) of St. Paul, MN, Lindsay Grantham of Wichita, KS, Sam Ho and Sydney Ho both of Topeka, KS, Kyle Babitt of Spring, TX, Elaina Grantham of DeSoto, KS and Courtney Babitt of Spring, TX; and one great-grandchild Michael Houts. Memorial contributions may be made in his honor to: Henryetta Education Foundation 523 W. Main Street Henryetta, OK 74437 In Memory of Earl Goldsmith
See more See Less

In Memory Of Earl David Goldsmith

Though services have passed, you can still send flowers to be placed on Earl David Goldsmith's grave.