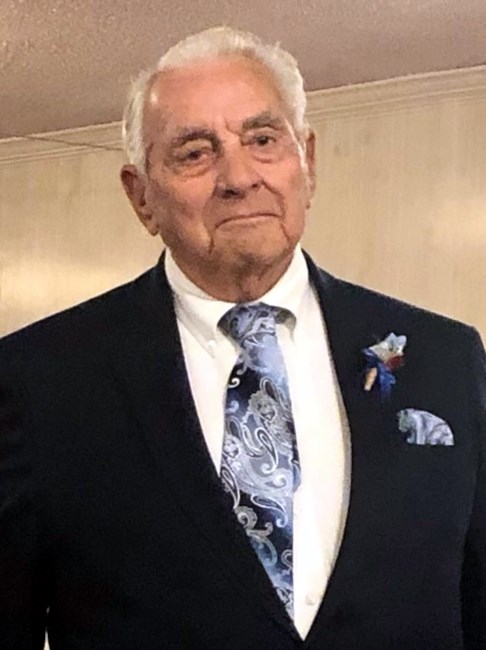 THOMASVILLE – Bill Garrett, age 90, died on May 5, 2022. He was born in Marble, NC, on December 24, 1931, to Willis Garrett and Anna Lunsford Garrett. Bill was a longtime member of Central Wesleyan and later Wayside Tabernacle Freewill Baptist Church. He taught Sunday School and served on the board at Central for 40 years. He was currently teaching Sunday School at Wayside Tabernacle Freewill Baptist Church. Bill worked for and retired from John H. Brinkley Construction. After retirement, he owned Garrett’s Landscaping. Bill loved reading his bible, fishing, hunting and spending time with his family. Two of his greatest joys in life were his family and the trip he took to Israel. Bill is survived by his wife Betty Watford Garrett; four daughters, Sandy Mitchell and husband Troy, Angie Garrett, Melissa Garrett and Gina Burrow; three step children; grandchildren, Rodney Cribb, Jonathan Bryant and wife Cortney, Chris Chappell, Justin Bryant, Steven Cribb, Ethan Chambers, Gina Robyn Burrow, Sherry Cribb; four step grandchildren, six great grandchildren and four step great grandchildren. In addition to his parents, he was preceded in death by his first wife, Irma Childers Garrett, and fifteen brothers and sisters. A funeral service will be held at Wayside Tabernacle Freewill Baptist Church, 3035 Upper Lake Rd, Thomasville, NC 27360 on Tuesday, May 10, 2022, at 2:00 pm. Burial will follow at Holly Hill Memorial Park Cemetery. The family will greet friends from 6:00 to 8:00 pm on Monday, May 9, 2022, at Sechrest-Davis Funerals & Cremations of Thomasville, 18 Randolph Street, Thomasville, NC 27360. In addition to flowers, memorials may be made to Wayside Tabernacle Freewill Baptist Church Building Fund at 3035 Upper Lake Rd, Thomasville, NC 27360. The family is under the care of Sechrest-Davis Funerals and Cremations of Thomasville. Online condolences: www.sechrestdavisthomasville.com –select obituaries.
See more See Less

In Memory Of Bill Garrett