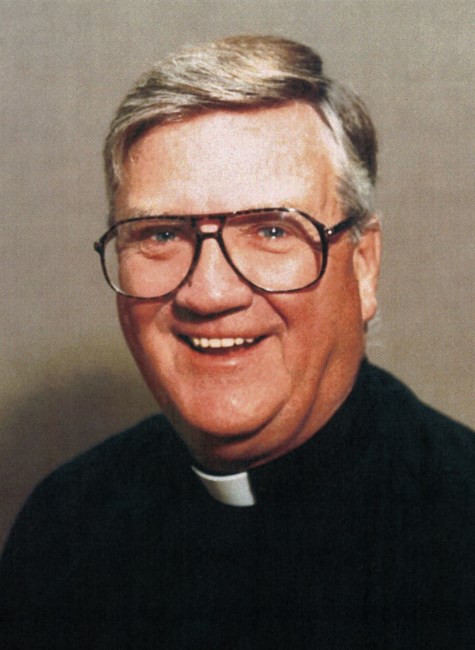 "Live simply so that others may simply live." Father Paul Jerome Cusack was born in Saint John New Brunswick on September 5, 1932, son of the late John and Genevieve (Brophy) Cusack. He is survived by his sister Mary Cool and brother-in-law Laurence Donovan, as well as many nieces and nephews. In addition to his parents, Father Paul is predeceased by his brothers John, George, sisters Elizabeth Donovan and Genevieve Cusack, and his brother-in-law Larry Cool and sister-in-laws Sally (Kean) Cusack and Adrienne Cusack. His early schooling was in Saint John, and, on his 17th birthday, he began Minor Seminary at Holy Cross Seminary in Dunkirk New York. After two years there, he joined the Passionist Novitiate in Pittsburgh Pennsylvania, where he professed his first vows. The remainder of his Seminary training took him to several monasteries in Eastern USA and he was ordained a Priest in Union City New Jersey in 1959 by Bishop O'Gara C.P., who had been a prisoner of the Communist regime in China. Fr. Paul's Pastoral Year (then called "Sacred Eloquence") took him to West Springfield, Massachusetts where he learned the fundamentals of preaching, a ministry that would be his hallmark for the rest of his Priestly life. His first assignment was as Assistant Pastor at St. Gabriel's Passionist Parish in Toronto Ontario, which he thoroughly enjoyed. However, after four years, he was appointed the Superior of a new ministry venture; a Catholic Information and Family Guidance Centre in Sudbury Ontario. When the Canadian branch of the Passionist Province of St. Paul of the Cross became a Vicariate in 1968, he was elected its first Regional Vicar and served for two three-year terms. Following that, a sabbatical year (1974-75) took him to Leuven Belgium for courses in Theology. On his return to Canada, he was once again appointed Pastor of St. Gabriel's. During this time, amid a decline in Passionist membership, he guided the Parish as the only full-time priest, welcoming possibilities of ministry for laypersons, women and men. His next assignment (1986), was to Holy Cross Retreat Centre in Port Burwell Ontario, which was initiating a focus on Creation-centred Spirituality and the work of Fr. Thomas Berry, C.P., During this time he entered the Doctor of Ministry Programme at St. Michael's College and Toronto School of Theology. His Doctoral Thesis was, appropriately, "Preaching the Passion of the Earth and Perspective Transformation", completed in 1990. Soon after his Doctorate, Fr. Paul returned to the ministry of Pastor of St. Gabriel's and was once again elected Regional Vicar. One could say that he continued a personal vocation to St. Gabriel's right up until the time of his death; first in the normal sense of the responsibility of Pastor, and then, when he "retired" as "Pastor Emeritus". During those years he oversaw the transformation of St. Gabriel's and the new Parish Church as well as the introduction of Fr. Brando Recana as the official Pastor. His heart has always been with the "good people" (as he liked to say) of the Parish. So very many people have benefitted from his interest in and care of them and their families, that he will be deeply missed. He had another strong interest that occupied his free time: golf. If not especially for his expertise, he will definitely be missed on many golf courses for his good humour and camaraderie. In lieu of flowers, donations may be made to Passionist Missions. Registration to attend the funeral mass in person is full. You are welcome to view the mass virtually via livestream at the link following link: https://pcusack.cdn.clearcable.net/ For full service details please see the information below.
See more See Less