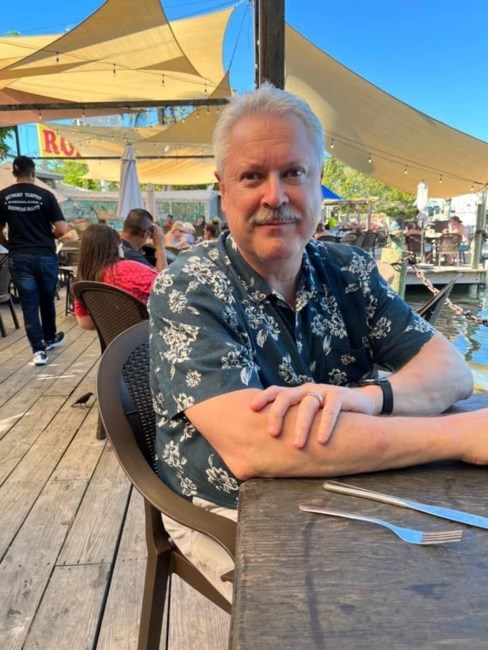 Christopher Robin Apgar, known for his tremendous warmth and kindness, passed away on December 11, 2021. Chris was born May 12, 1961in Prineville, Oregon. Fiercely independent and industrious, Chris worked part-time in high school, played the tuba, and performed in theater. In his junior year, he was the lead in Madras High School’s production of Harvey. Chris graduated high school a year ahead of time and went on to complete his associate degree in accounting in 1986 at Central Oregon Community College, where he served as student body president. In 1990, he completed a bachelor’s degree in psychology at Portland State University. Chris married Julia Huddleston in 1995, and together they purchased a home in Portland, Oregon. There, they raised their children and their beloved labradoodle, Katherine. Chris worked at Providence Health Plans until 2004, when he began his own HIPAA consulting firm, Apgar & Associates, LLC. Chris was an educator, mentor, and leader. He was a nationally recognized expert and educational instructor on multiple topics including information security and privacy. He taught frequently in classrooms and at conferences and facilitated panels dealing with numerous topics. Chris was also active in his local community, developing and conducting educational webinars, and assisting physicians and other medical professionals in Oregon and across the country. First and foremost, Chris loved answering questions, offering guidance, and helping people in whatever capacity he could. In his free time, Chris enjoyed cooking. Imaginative and inventive, Chris was a natural born chef. From a young age, Chris won awards for his baking and worked as a line cook. He could whip up a perfect meal from whatever he had available in the refrigerator. Most of all, Chris loved new experiences. Whether dining at fine restaurants, scuba diving, or traveling, Chris was always the first to volunteer for thrill rides like roller coasters and parasailing, always open to trying a new recipe, and always one to introduce himself to new people. He was widely loved by those who knew him and will be missed tremendously. Chris loved his family more than anything. He is survived by his wife, Julia, who resides in their family home in Portland, Oregon; his children: Autumn and her partner John, Jeremiah, Sarah and her husband Kevin, James and his wife Brianna, and his daughter-in-law Megan; his grandchildren: Hannah, Addyson, Weylin, Atreyu, and Henry; his stepmother, Lilita; his sister, Phoenix Glade; and many cousins, nieces, and nephews. He is predeceased by his mother, Jeanne; his father, Bill; his sister, Wendy; and his son, Jonathan. His Funeral Mass will be held at 11am on January 7, 2022 at St. Clare Parish in Portland, Oregon. In lieu of flowers, the family asks that donations be made to the Oregon Coalition Against Domestic and Sexual Violence.
See more See Less

In Memory Of Christopher Robin Apgar