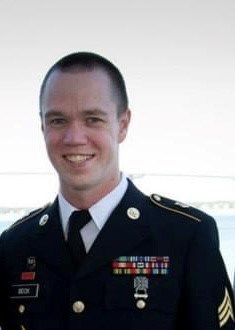 Travis J. Beck, age 40, died of pancreatic cancer on October 10th, 2022, in Centreville, VA. Travis is survived by Tracy Beck, his wife of 9 years; and his children Iain, Echoe, and Madelyn; his father and stepmother, Ken and Karen Beck, and his brother and sister in-law Justin and Lindsey Beck. He is preceded in death by his mother, Patty Beck. Travis was born on May 26th, 1982 in Dekalb County, GA, to parents Ken and Patty Beck. He graduated from Brookwood High School in Gwinnett County, GA. In 2006, he enlisted in the U.S. Army and served in Operation Iraqi Freedom. After ten years of active duty service, he transitioned to the Army Reserves. After leaving active duty, Travis worked for a civil rights law firm, Relman Colfax PLLC from 2017 until his passing. Travis was a selfless man and fighting against injustice was something he was very passionate about. Travis was a great family man and a loving father and husband. He was a lifelong, diehard Atlanta Braves fan who even proposed to his wife at a Braves game. In lieu of flowers, donations can be sent to PANCAN at http://support.pancan.org/goto/TeamTravis Fond memories and expressions of sympathy may be shared at www.floralhillsfuneral.com for the BECK family.
See more See Less

In Memory Of Travis Jackson Beck