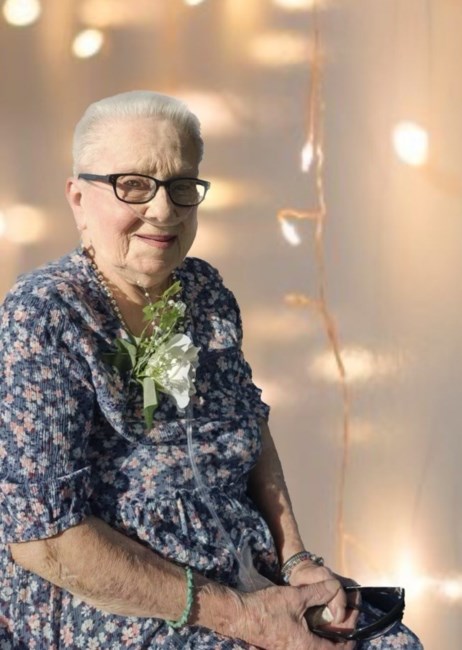 Barbara June Brown nee Smith passed away September 14, 2022, at the home of her granddaughter. She was born June 2, 1928, in Pasadena, California, the daughter of Harry E. and Midge Smith. Barbara moved to Arizona with her family after 1935 and lived there the rest of her life. She earned her High School Diploma from American High School in 1959. She married Calvin A. Brown on February 6, 1944, in Salome, Arizona. They divorced in the early 60s and remarried in 1964 only to divorce again in 1971. Barbara worked for Tucson Newspaper Inc. in the 1960s and a pet store in the 70s and then at RV Awards in the late 70s and 80s. She enjoyed horses and loved to ride. She was very artsy and enjoyed cross-stitch, crochet, knitting, and word puzzles. Many people were the recipients of her lovely baby blankets. In addition to her parents, she was predeceased by her sister Jean Hennessy and her brother Harry Smith, Jr. Surviving are her daughter Arlene Rivard (Ted), her sons Ed Brown (Kathy), Dennis Brown (Agnes), and Scott Brown (Kathleen). Her grandchildren Doug Rivard (Joanie), Kelly Ives, James Smith, Kati Black (Kevin), Corey Brown, Eric Brown (Breann), Ryan Brown, Lindsay MacLeod (Jason), Jay Brown, Cooper Brown (Valerie), Colton Brown (Sarah), Cheyenne Brown, Jack Brown, Amanda Gille, Christian Brown (Brittany), Sam (Brittny) Brown, Ben Brown, and Rachael Southard (Chance). Also, many great grandchildren and great, great grandchildren. A Celebration of Life will be held October 16, 2022, at 2:00 PM at Ora Mae Harn District Park, Ramada 1, 13250 Lon Adams Rd., Marana, Arizona. RSVP Lindsay MacLeod at lindzqueen@gmail.com or Doug Rivard at rivard.da@gmail.com
See more See Less

In Memory Of Barbara June Brown