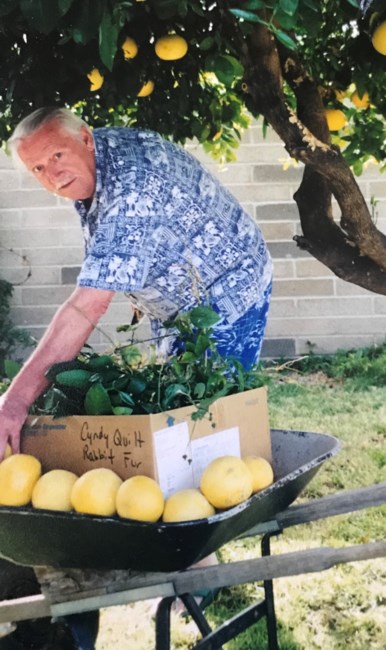 Robert Edward Lloyd April 15, 1939 – March 29, 2021 Robert Edward Lloyd, 81, of Tucson, Arizona took his final journey to heaven on the morning of March 29, 2021, after a long fight with Parkinson/ Dementia. Robert was born in Sanford, North Carolina, to deceased parents John (Jack) and Oner Lloyd. At the age of 17, he joined the Air Force, serving 8 years, where his final assignment was Phoenix, Arizona. He was successful in many jobs but ultimately retired at age 50, January, 1990, as a telephone engineer in Tucson, Arizona. His last project was to procure the funding to place a radio system at two sites in the bottom of the Grand Canyon. To occupy his time in retirement, he became a self-taught oil painter. His artwork is displayed in the homes of many friends and family members. His Parkinson Doctor used his oil paintings in the examination rooms to show others there is life after a Parkinson diagnosis. Robert is survived by his wife Valjean (Val) of 38 years; one son from his first marriage to Linda Lloyd, Christopher (Chris) Lloyd; stepson, Mark Hollonbeck (Flor); stepson, Michael Hollonbeck (Lupita); grandchildren, Michael Lloyd, Morganne Lloyd-Leyva (Steven), Nathan Lloyd; step grandchildren, Esmeralda Hollonbeck, Mark (Tony) Hollonbeck, Kayla Hollonbeck, Kylie Hollonbeck, and Lila Grace Hollonbeck; great grandchildren, Daisy Kay Leyva and Aria Lloyd; sister Cathy Servie (Mike) of Kill Devil Hills, NC; sister-in-law, Beverly Lloyd of Cary, NC; and many nieces and nephews of NC. Robert is preceded in death by his parents, Jack and Oner Lloyd; brother, Henry Lloyd; sister, Nancy Gardner; and his brother-in-law, Obie Gardner. Robert was blessed to have so many friends throughout the years. He was a stranger to no one. His love of telling stories about his life is what everyone will remember the most! You are invited to join Robert Lloyd's family and friends to celebrate his life. The service will be held on Sunday, April 18, 3 - 4 PM, at Grace Community Church, 9755 N. La Cholla Blvd. Mask is required. In lieu of flowers please donate to Parkinson Research, Grace Community Church, or the charity of your choice.
See more See Less

In Memory Of Robert Edward Lloyd