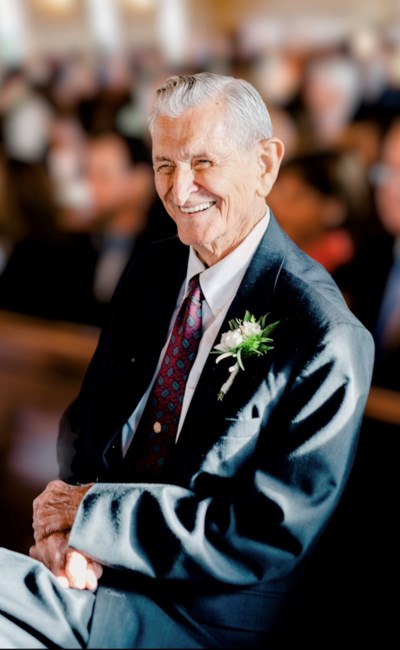 Billy Thomas Crowder passed away January 14, 2023. Graveside services will be Wednesday, January 18, 2023 at 2:00 p.m. at Memory Hill Gardens. Billy was preceded in death by his parents, Julia Frances and Elijah Mart Crowder; Beloved wife, Wynona Patterson Crowder; Daughter, Karen Lynn Crowder; and Sister, Marie Dyer. He is survived by his daughter, Joan Ragsdale Copeland (Steve); Sister, Margaret Haun; Sister-in law, Emogene Patterson; Grandchildren, Jonathan Andrew Copeland (Amber), Matthew Crowder Copeland (Susanna), Benjamin Steve Copeland (Anna), and Lindsay Copeland Higginbotham (Clay). Bill was born in 1932 to Julia Frances and Mart Crowder. He was fiercely independent and started working while in high school. He met and married his wife, of over 50 years, Wynona Patterson, at 19 years old. He joined the Air Force and traveled to Germany, Italy, and later Korea and Vietnam, among domestic tours. He had two daughters, Karen Lynn and Joan Carl and his family was the center of his world. When his grandchildren arrived, Jonathan, Matt, Ben, and Lindsay, his focus and joy was on spending time with them and enjoying teaching them, playing with them and watching them grow. As each of the grandchildren married, he loved getting to know Amber, Susanna, Anna and Clay. He moved to Birmingham last year and was able to see each of the children regularly. Bill stayed in touch with his sister, Margaret, sister-in-law, Emogene, and special friend D’ann Gunn, as well as many close friends. He will be missed terribly by all who knew him. Pallbearers will be Jonathan Copeland, Matthew Copeland, Ben Copeland, and Clay Higginbotham.
See more See Less

In Memory Of Billy Thomas Crowder