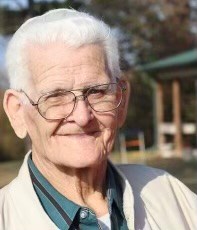 WILLIAM RAY (BILL) WATSON August 5, 2022 William Ray (Billy) Watson age 92, of Tyler, TX was born in Dallas TX on June 25, 1930, and went to be with the Lord on Tuesday, August 2, 2022. Born and raised in Dallas, Texas, Bill grew up with one brother, Malcolm and one sister, Martha Jean, and also had three half siblings: Kathleen, Suzanne & John. He met his wife and love of his life, Brigitte Lehman, while working for the family business in Sherman, TX and they were married 59 years. Bill was preceded in death by his parents, Houston and Jewel Lilley Trammel Watson, his brother, John Watson, sister Martha Jean Watson Nelson, son William Ray Watson, Jr., and son Michael Watson. William (Bill) Watson was a wonderful husband and father who dedicated his life to raising his and Brigitte’s five children. After his family, Bill's passion was working and raising cattle on a small farm he had with his brother near Tyler. They built a building on the farm that served as a business conference center and gathering place for the Watson family on holidays and other special days. Bill joined the U.S. Navy and served honorably during the Korean Conflict. He served as a Boatswain’s Mate on the Heavy Cruiser USS Columbus, CA 74 and the USS Philip, DDE 498. After discharge he went to work for the family business Watson Electric Supply Company. He finished the final 10 years of his career as property manager for many of the family’s supply stores. Bill attended Green Acres Baptist Church and was very active in the East Texas Korean War Veteran’s Association, serving on the honor guard for many of his comrade’s funerals locally. Bill enjoyed working with his hands, especially with wood and rope. He helped his son, Paul and grandson, Bryant and other scouts with their scouting skills in earning merit badges. He made Indian flutes and other accessories as a reflection of his artistic talent. Bill loved the outdoors. Bill was a caregiver and would try to help take care of you and any problems you had. Bill is survived by his wife Brigitte of Tyler, sons Paul Watson and wife Sheri of Tyler, Dale Roy Watson of California, John Purser of Tyler, and daughter, Debra Pippen and husband Jerry of Lawton, OK; brother, Malcom Watson of Dallas, sisters: Suzanne Green of Oklahoma and Kathleen Tubbesing of the Dallas area. He is also survived by 8 grandchildren, several great-grandchildren, and many nieces, and nephews. Bill is remembered as a Christian, a family man, always-there man, a hunter, a fisher, a scouter, a mentor, a Navy veteran, a great neighbor and friend. Bill shared many fun and loving memories with us and will be greatly missed. SCHEDULE OF SERVICES Tyler Memorial Funeral Home Chapel • Visitation with family, 1:00PM-2:00PM • Monday, August 8, 2022 • 2:00 PM • 12053 State Hwy 64, • Tyler, TX 75704
See more See Less

In Memory Of William Ray Watson