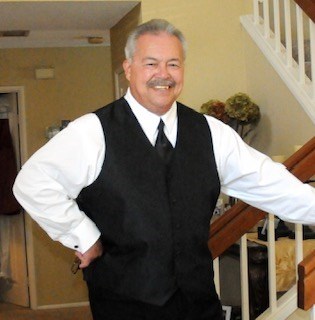 John L Alderete, 70, of Rancho Cucamonga went to his eternal rest on April 29, 2022. John was born on May 19, 1951 in San Pedro Ca. to Henry and Angela Alderete. John grew up as an adventurous boy and a fun-loving teenager in the Wilmington area, where he graduated from Banning High School. John joined the United States Marine Corps in 1970, and proudly served in the reserves for 9 years. John met his beautiful wife Arlene and they were married in July 1974. John and Arlene had three children, Natalie, Johnny and Valerie. They moved to Rancho Cucamonga in 1987, where they made their home for the past 35 years. John loved reading Lewis Lamour books, visiting museums, camping and traveling in his RV with family, cooking, woodworking, and Dodger baseball. John was a family man, and a hard worker. Over his life, John had careers as a Cement Mason, a Chaffey College Police Officer, and a Registered Nurse in the ER at Kaiser Permnente. We will remember him most for his sense of humor, his steady presence, and his love for his family. John is survived by his mother Angela Alderete; his wife Arlene Alderete; his three children, Natalie (Todd) Smith, Johnny (Leah) Alderete, Valerie (David) Cobos; his seven grandchildren, Noah and Gabriel Smith, Ella and Harper Alderete, Colette, Teresa, and Reina Cobos; and his sister Rose (Rocky) Young. He is preceeded in death by his father Henry D. Alderete, and his brother Henry Alderete Jr.
See more See Less

In Memory Of John Lawrence Alderete