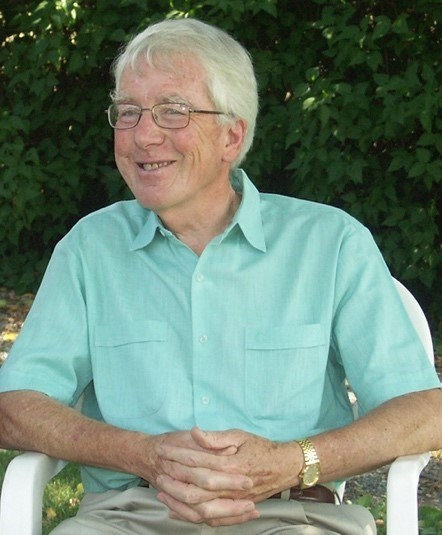 Herbert James Thorburn (Herb) died peacefully at Vernon Jubilee Hospital, at the age of 87, on September 10, 2022. He is survived by his loving wife of 65 years, Lorna (French), his four children Diane (Rob) Entwistle, Christine (Andrew) Hicks, Linda (Mark) Hachmer, and James (Chantel) Thorburn, and 9 grandchildren John (Kilee), Allie and Scott (Crystal) Entwistle, Annika (Jesse), Kendra and Peter Hicks, Sarah, Emily and Dylan Hachmer. Also survived by his brother Rick Thorburn (Linda). Predeceased by his parents Herbert Thorburn (Bert) and Henrietta Thorburn (Etta), his brother Bill Thorburn and sister Sylvia Leitner. Herb was born in Vernon in 1935 and graduated from Vernon Secondary School in 1953. He graduated from UBC Engineering in 1958 as a Civil Engineer. He was a member of the University Naval Training Division where he developed a lifelong passion for sailing. Herb and Lorna were married in Vernon in 1957. While at UBC, Herb entered a “jingle” contest at the local Sears store and won the grand prize - a 1957 Cadillac. After showing it off to family and friends, he traded it in for a Volkswagen Beetle as the gas bill was much less. Herb and Lorna drove the Beetle to Ottawa where Herb worked as an engineer for the National Research Council, and their first daughter, Diane, was born. Herb was awarded an Athlone Fellowship with the University of Bristol and he, Lorna and Diane moved to Bristol England for 3 years where their second daughter Christine was born. Upon returning to Canada, Herb accepted a position at Alcan Research and Development as a research engineer in Kingston Ontario. Their third daughter, Linda and their son, Jamie were born in Kingston. Herb spent 35 years at Alcan R & D and enjoyed a successful career as a research engineer. He is the inventor on several patents relating to aluminum processing. Kingston was their home for 40 years. After retirement, Herb and Lorna returned to their hometown of Vernon and settled in the Coldstream, where they rekindled old friendships and quickly became a part of the community. Herb was a keen skier and skied his last run with his children at age 83. As a teenager, he followed in the footsteps of his Dad, Bert, and skied at Silver Star long before the first chairlift. He instilled that love of skiing in all his children. He was a local historian and served as the president of the Okanagan Historical Society (Vernon Branch). He was a lifelong learner, with an interest in genealogy, technology, and astronomy. He curled in both Kingston and Vernon. He and Lorna sailed on Lake Ontario on their sailboat Niska for many years. Herb had a love of travel, and he and Lorna always had their next trip planned. Their travels took them all over the world, by boat, plane, and rickshaw. Their last trip together was cruising around Australia in the spring of 2020, just as the pandemic was hitting which caused some extreme measures to get back home. Herb had a quiet, steady presence in our lives and a dry sense of humour. He was very proud of his 4 children and 9 grandchildren whom he loved having around. He started more projects than a person could finish in a lifetime. We never saw tradespeople in our house – he was the electrician, plumber, carpenter, and general repair man. He had a great skill of repurposing “stuff” and never threw anything out just in case he might need it to fix something else. He invented countless gadgets to solve myriad problems around the house. He had a great frog dive, and a keen sense of adventure. Herb was an active man who rolled over the odometer on his clunky old Raleigh multiple times. He only ever bought bikes from Canadian Tire with his beloved Canadian Tire Money. He loved the ritual of a pre-dinner drink, and particularly a good martini with one olive, stirred not shaken. He will be greatly missed by all his family and friends. The family would like to thank the wonderful staff at Vernon Jubilee Hospital for the excellent care they gave Dad in his final days, particularly the nursing staff on 2East/West. A family gathering and celebration of life will be held early in 2023. Donations in Herb’s memory can be made to the Vernon Jubilee Hospital Foundation https://vghfoundation.ca/ or the Myasthenia Gravis Society https://mgcanada.org/donate/
See more See Less

In Memory Of Herbert James Thorburn