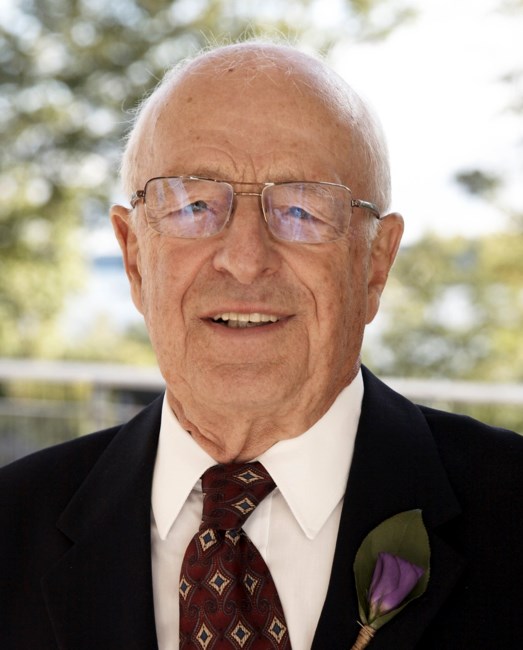 John died peacefully of natural causes in Sidney B.C. early Monday morning. Born in Didsbury, Alberta to Bruce and Rose (Husband) Parker, John was raised on the family farm during the depression, developing a unique combination of farm values, prairie pragmatism, Yorkshire thrift and Alberta optimism. He graduated in 1951 from the University of Alberta with an iron ring and a future in mining engineering, but most importantly having met the love of his life Helen Panabaker. After a brief stint in Uranium City, Saskatchewan, John accepted a position with Norman Byrne as a consulting engineer in Yellowknife, Northwest Territories. That move began a long association with the north bringing many changes to both John’s life and the land he adopted and so respected. John and Helen were married in 1955. With abundant spirit, Helen left bustling Calgary for an apartment above John’s Yellowknife office. Their new life together was filled with building family and forging lifelong friendships. John became an owner of Precambrian Mining Services Limited, regularly traveling to bush exploration camps and mine sites. One of his happiest places was flying in a bushplane, with a map on his lap and maybe just a small piece of chocolate in his pocket. He loved the land, the rocks, the lakes and most of all, the people he met. John’s principles and convictions were only equaled by his passion to create a better place. He epitomized the bush rule of “leaving a place better than you found it”. Consequently he needed little encouragement to serve on Town Council, first elected in 1959 and then serving as Mayor of Yellowknife from 1964 to 1967. His commitment to the north was further strengthened in 1965, when he was asked to join the Carrothers Commission, mandated to map out future possibilities for northern government. During this time John travelled extensively, visiting fifty-one communities throughout the NWT, to better understand the perspectives of its peoples. As co-author of the final report, he was inspired and driven to bring responsible government to the NWT, ushering in an era where all voices were represented. The report’s findings ultimately lead to many significant changes in northern government, most importantly the creation of Nunavut. That work led to John’s appointment as Deputy Commissioner of the NWT, coinciding with the 1968 move of the government from Ottawa to Yellowknife. John worked tirelessly building relationships across the north to create better government, while keeping his focus on community involvement. His appointment as Commissioner in 1979 launched his plan to work himself out of a job. During his ten -year term, John oversaw the transition of power to elected representatives, and ultimately an elected Premier. In 1989 Helen and John moved to Sidney B.C., where John took on many consulting roles, including drawing the new boundary line between the NWT and Nunavut. Outside of work he led an active life in his appreciation of music, philanthropy, gardening, travel and woodworking. As recently as 2016 he was snorkeling in Fiji! John had deep and sincere relationships, the most important being with Helen, who he adored and loved. He is survived by Helen, his sister-in-law Kathy Parker, his children Sharon (Jim) Duke and Gordon (Jill Birch) Parker, his grandchildren Alyssa (Dan Wyman) Duke, Michael Duke, Graeme (Zena) Parker, Nigel (Karla Telidetzki) Parker, Victoria Parker, Alyson Parker, step grandchild Clayton Birch and his great-granddaughters Nora and Isla Parker. John was predeceased by his brother Bill Parker. John’s strong optimism and resourcefulness ensured the practical lessons from the farm and the bush were brought to bear on everything from finding consensus in the NWT Legislative Assembly, to building the family cabin. He loved to build and grow things, from mentoring future northern leaders to instilling life lessons in his grandchildren. John’s quiet guidance would show the way forward, especially when it came to tractor and boat driving lessons with his grandchildren. Those who knew John remember his keen sense of humour and his mastery of puns, which he retained to the end. The family would like to thank the caring and compassionate staff of Sidney All Care, who provided John a wonderful home for the last eight months. Donations in lieu of flowers are encouraged to the charity of your choice, or to either the Yellowknife Foundation or the Victoria Symphony Society. The family would like to advise that the planned memorial has been postponed due to current conditions. A new date will be announced when conditions permit.
See more See Less

In Memory Of John Havelock Parker