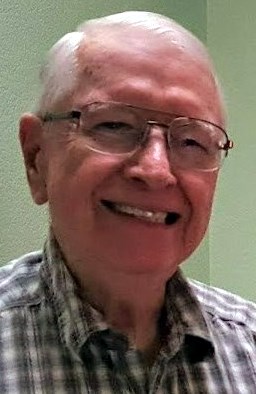 William Joseph “Bill” Kirchner passed away at home on May 19, in Victorville, CA, just a few days after his 90th birthday.

He was born on May 10, 1931, in Wymore, Nebraska, to Thelma Alice (Stewart) and Ralph John “Toots” Kirchner. He spent his childhood in Wymore before moving with his family in 1946 to Riverside, California, after his mother re-married Frank Bingham. He graduated from Riverside Polytechnic High School in 1949 and enlisted in the Navy, where he served until 1953. He was stationed on a communications ship in South Korea and Japan. He married Patricia Earlene Nutbrown on March 23, 1963, in San Bernadino, CA. During his time in the Navy, he earned a B.S. in Electrical Engineering, and upon leaving the Navy he was employed by General Dynamics for over 30 years. During this time, he travelled the world (Italy, Japan, Korea) for the company working on various projects. After retirement he and Pat moved from Pomona, CA, to Wymore for a few years in the 1990s before settling in Victorville. He was a staunch Democrat and loved to bet on the horses.

He is survived by his wife Pat, daughter Emily, of Victorville, son and daughter-in-law Jim and Teresa Kirchner of San Antonio, Texas, brother James Kirchner of Corona, California, and several cousins. He was preceded in death by his parents, brother Robert Sheldon “Bob” Kirchner, sister Patricia Roberts. Burial service will be held on Wednesday, June 9 at 10:00 a.m. at Desert View Funeral Home.

Messages of condolences can be left on Bill’s obituary at the Desert View Memorial Park website. https://www.dignitymemorial.com/funeral-homes/victorville-ca/desert-view-funeral-home/9591

In Memory Of William Joseph Kirchner