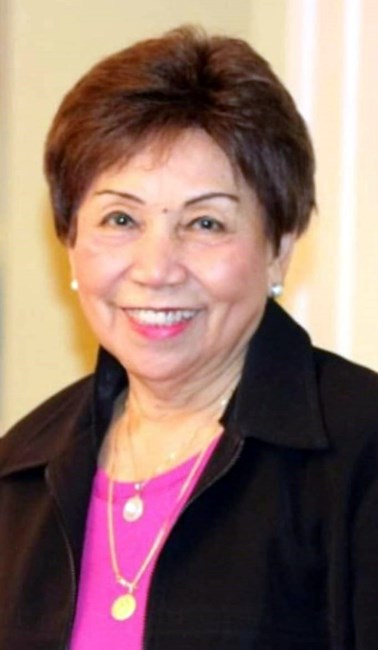 Antonia Tan Conda, 89, was embraced by God in heaven on January 22, 2023. “Tony” or “Ping” as her family called her was born in Jolo, Sulu, Philippines on July 4, 1933 to Muy Tan and Felicidad Estrella Tan. She was the third child of seven and is survived by her beloved sisters Angelina Tan Garcia and Anita Tan Joson. Antonia, who graduated from Zamboanga General Hospital with a Registered Nursing Degree in 1954, came to America shortly thereafter to begin her career as a nurse in Chicago, Illinois, moved to Baltimore, Maryland, and eventually settled in Virginia Beach, Virginia. Her career in nursing covered OB-GYN, ICU, CCU and pediatrics and she worked at several hospitals, including the U.S. Public Health Service, U.S. Naval Hospital Portsmouth, Maryview Hospital, and ultimately Westminster Canterbury Retirement Community. While living in Baltimore in 1959, she met a young Navy enlisted man Orlando M. Conda who she married in 1960. Antonia is survived by her two sons Cesar V. Conda and Bernard T. Conda and five grandsons from Cesar and his wife Janice G. Sadaya-Conda: Jared, Jeremy, Jorge, Jacob and John Caleb Conda. Antonia will be remembered as a beautiful loving wife, mother, grandmother, sister and aunt to her family. She loved to cook and was always making sure that everyone was well fed. She enjoyed playing Mahjong with her family and friends. She was a very strong-willed, eternally optimistic woman, who took pride in her job and how she presented herself to others. Above all, Antonia put her family above everyone else, especially her children and grandchildren A Rosary service will be held on Saturday, January 28, 2023 at 1:00pm at Smith & Williams Funeral Home followed by a Celebration of Antonia's life at 2:00pm. Inurnment will be on Friday, February 10, 2023 at 1:00pm at Albert G. Horton, Jr. Memorial Veterans Cemetery in Suffolk, VA. Fond memories and expressions of sympathy may be shared at www.smithandwilliamskempsville.com for the Conda family.
See more See Less

In Memory Of Antonia Tan Conda