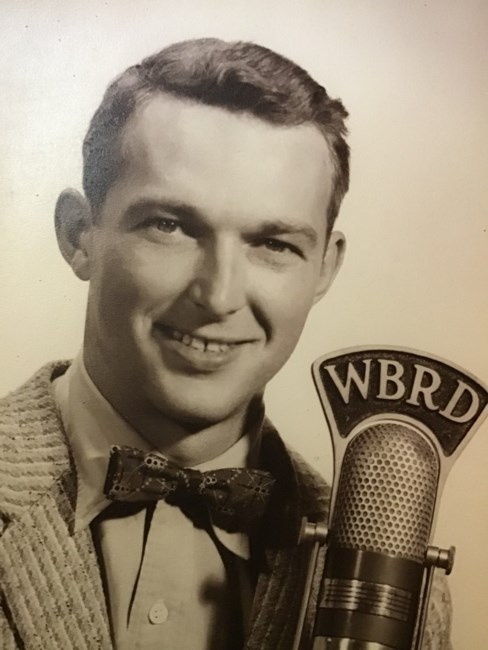 Milburn Garland “Gil” Butler was born December 1, 1935 in Bradenton, Florida. He attended local schools, where his mother was a teacher. He grew up in a community where electrification was still being developed, where the Saturday morning movies were an all-day entertainment for kids, and where families would gather in the town square on Sundays for band music and ice cream. After a brief stint in the Army (serving as a quartermaster at a base near Washington, D.C.), Gil Butler went to college in Colorado, returning to Florida where he graduated from the University of Florida with a degree in radio engineering. Along the way, he met and after a whirlwind courtship married Judith Bunten, who would become his lifelong companion. Gil Butler began working as a DJ at a small radio station in Bradenton, Florida in the early 1950s, spinning disks from the very beginning of Rock and Roll. His love of music of all sorts, from Jazz to Rock to Classical, his collection evolved through several formats (LP, cassette, CD, and MPs), and his special chair was always surrounded by the music he would enjoy while reading in the evening. Professionally, Gil moved up to larger stations and more challenging positions in radio and television; working for radio stations around the Tampa Bay area. His first TV gig was as a general reporter for WTVT in Tampa. From there, he moved to WXYZ in Detroit, Michigan, before moving to Silver Spring in the Washington D.C. where he worked as a White House Correspondent for local CBS affiliate, WTOP, covering Washington politics under presidents Nixon and Ford. During this period, Gil appears briefly in Timothy Crouse’s The Boys on the Bus (a recounting of the White House Press Corps during the Nixon Era). He was one of the six “Knights of the Green Ottoman,” named for an item of furniture in the 1972 White House press complex, where the newsmen would gather and share notes. In one passage, he is described: “Gil Butler… the reporter for TV station WTOP, who was chuckling over a volume of Mencken...” This description will surprise no one who knew him, as Gil was a voracious reader. He was always in the middle of a massive nonfiction volume about politics, military history or the Space Race. After WTOP, in 1978, Gil began his ultimate career at the Voice of America, the United States Information Agency’s international radio network. Over a nearly three decade career with Voice of America, he covered 68 countries, working abroad in Cairo, Egypt, Beiruit Lebanon, Beijing, China, London, England, as well as covering the State Department and Pentagon during his time at home between foreign assignments. At the Voice of America’s 40th Anniversary Celebration, Gil received the Meritorious Honor Award for his work in Cairo covering the assassination and funeral of Egyptian President Sadat and its aftermath. Twenty-seven years later, Voice of America News ran a story looking back at that work and the restraint and integrity he exercised in waiting for confirmation before reporting that Sadat had been killed. Moving from Silver Spring in the late 1970s, Gil spent many years on a small horsefarm in Accokeek with his wife Judi, maintaining their home, called “The Poplars,” gardening, and taking his grandchildren to art museums and concerts. While never a horse person, himself, Gil was devoted to maintaining the farm, outbuildings and the ever-growing menagerie of cats, dogs and horses. Later, after his wife Judi required full-time nursing care, Gil sold the farm and moved to Waldorf to be closer to his wife. When COVID restrictions prevented him from coming in to visit, he would stand outside her window, wave to her, and have what conversation he could with her through the glass. He was, to the end, a devoted, loving and loyal husband. Gil Butler was a voracious reader, a professional and avid follower of government and politics, willing to discuss the intricacies of the nation, past and present, with insight and first-hand knowledge. A lifelong political progressive, Gil Butler was proud to have been born during Franklin D. Roosevelt’s administration and expressed relief at living to see the end of the 2017-2021 presidential administration. Gil Butler passed away Sunday, October 10, 2021 in his home in Waldorf, Maryland. He is survived by his wife, Judith Butler; his children, John Butler and his wife Rosa Butler, Peter Butler and his wife Lynn Butler, and his daughter Melinda Butler Walker; his grandchildren, Sylvia Molina, Evan Brettell, Scurvy Walker, Violet Butler, Benjamin Butler, and Charles Butler; and his great-grandchildren, Ethan Butler, Daphne Molina, and Joshua Brettell.
See more See Less

In Memory Of Milburn Garland Butler