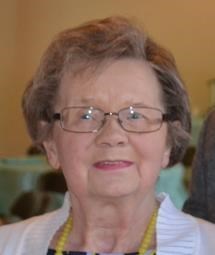 Agnes Lamote, 95, died on January 22, 2023 at home. Agnes was born March 17, 1927 in Belgium, the daughter of Jozef and Zoe Rathe. On November 25, 1951, she married Leo Lamote and soon immigrated to the Detroit area. Agnes was a wife and mother of four. She was very artistic and showcased her talents through baking, knitting, crocheting and sewing. She was also an avid euchre player. Her grandchildren were a delight in her life and she was thrilled to welcome great grandchildren. She was predeceased by her husband of 58 years Leo and her grandson Nicholas. She is survived by her children Jerry Lamote (Sue) of Virginia, Christine Bates (Mike) of Onekama, Julie Geyman (Paul) of Warren and Monica Gardner (Andy) of Virginia; grandchildren David, Kimberly, Michelle, Tom, Jillian, James, Katie, April and Benjamin; and great grandchildren Cora, Sophia, Nicholas, Brynnlee, Emberly, Kenleigh, Sawyer, and Elliott. A Funeral Mass will be held at the St. Joan of Arc Catholic Church, 22412 Overlake St, St Clair Shores on January 27, 2023 at noon. Visitation will begin at 11:00 am at the church. In lieu of flowers, please send donations to www.stjude.org or www.smiletrain.org Sign Agnes's guestbook at www.ahpeters.com. The Funeral Mass for Agnes will be livestreamed and can be found at this link https://sjascs.org/
See more See Less

In Memory Of Agnes Lamote