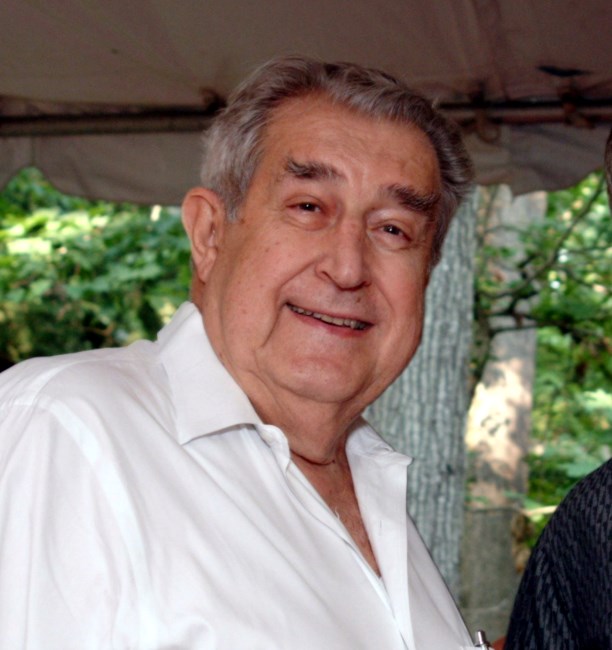 Dr. Charles Maria Herzfeld 1925-2017 Dr. Charles M. Herzfeld, (91), renowned scientist, national security expert, and businessman died in his sleep at home in Silver Spring, MD on February 23rd. The cause of death was complications from multiple strokes. Charles Maria Herzfeld was born in Vienna, Austria on June 29, 1925. He was the only child of August Alfred Herzfeld and Frieda Poehlman Herzfeld. After his father’s death in Budapest during World War II, he and his mother fled west through Europe to Portugal, just managing to escape the Nazis. They arrived in America in October 1942 and were met by his uncle and aunt Karl F. Herzfeld and Regina Flannery Herzfeld, both distinguished professors at Catholic University in Washington, DC. He became a naturalized citizen in 1946. Dr. Herzfeld received his B.S. in chemical engineering at Catholic University in 1945 and his Ph.D. in physical chemistry from the University of Chicago in 1951 where he studied under James Frank, Harold Urey, Enrico Fermi, Clyde Hutchison and other well-known scientists. Upon completion of his thesis, he was drafted into the US Army and following basic training was sent to the Ballistic Research Laboratory in Aberdeen, MD. After his tour of duty was over in 1953, he worked at the Naval Research Laboratory. In 1956 he began working at The National Bureau of Standards where he became one of the youngest Division Chiefs in the Bureau’s history when he was named Chief of the Heat Division in 1959. In 1961 he was recruited to work at the Defense Department’s ARPA (Advanced Research Projects Agency), now known as DARPA. He headed the Ballistic Missile Defense Program from 1961 to 1963, served as Assistant Director from 1963 to 1965, and Director from 1965 to 1967. As Director of ARPA, Dr. Herzfeld recognized the importance of computers, particularly when they were linked, and funded and oversaw the creation of the ARPANET which eventually became today’s internet. In recent recognition of this foundational role, in 2012, Dr. Herzfeld was inducted into the Inaugural Class of the Internet Hall of Fame and designated an Internet Pioneer. Among other contributions while at ARPA, he was also responsible for critical ballistic missile defense technology, advances in nuclear test detection, GPS related capabilities, and many other revolutionary technologies. After leaving ARPA, he relocated to the New York City area where he was vice president for research and technology at ITT Corporation, and later vice chairman of Aetna, Jacobs, Ramo Technology Ventures. Dr. Herzfeld returned to Washington DC in 1990 to serve President George H.W. Bush first in the Department of Defense as the Director of Defense Research and Engineering from 1990 to 1991 and then in the White House as senior consultant to Alan Bromley, the Science Advisor to the President from 1991 to 1992. After leaving government, Dr. Herzfeld took on numerous consulting projects including significant work for the Los Alamos National Laboratory. Most recently he was a Senior Fellow and Member of the Board of Regents of the Potomac Institute for Policy Studies. He served on many government advisory boards and panels. He was a member of the Chief of Naval Operations Executive Panel since its formation in 1970 under Admiral Elmo Zumwalt to the term of Admiral Vern Clark and has served numerous terms on the Defense Science Board and the Defense Policy Board. He was appointed to the National Commission on Space by President Reagan in 1985. Dr. Herzfeld received many honors and awards throughout his lengthy career including the prestigious Navigators Award of the Potomac Institute for Policy Studies. He was a member of the Council on Foreign Relations, and the International Institute for Strategic Studies in London. He was also a fellow of the American Physical Society and the American Association for the Advancement of Science. In addition, he was a member of the Cosmos Club in Washington, DC and the Explorers Club in New York. He was a dedicated sailor and an avid scuba diver and underwater photographer until his mid-eighties. Dr. Herzfeld was predeceased by his parents. He is survived by his wife of nearly 27 years Shannon S. S. Herzfeld; his three sons from a previous marriage, Charles C. Herzfeld (Paul Rogers), Thomas A. Herzfeld, and Paul V. Herzfeld (Valerie); his grandchildren Steven Herzfeld and Katie Herzfeld; his two step-daughters Rose Shuman and Rachel Shuman (Alex Banks) and her two children, August and Henry. The family would like to express their deep gratitude and appreciation to the skilled and dedicated doctors and care-givers who assisted Dr. Herzfeld in his final years. Donations may be made in his memory to the Divers Alert Network (DAN) www.DiversAlertNetwork.org.
See more See Less

In Memory Of Charles Maria Herzfeld