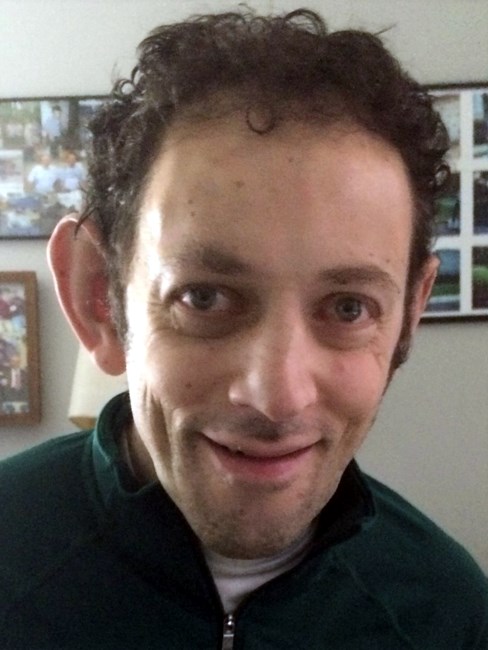 Robert Andrew Commisso (April 25, 1978 – April 13, 2021) Our beloved Andrew departed after a short illness in Bethesda, Maryland. Andrew was born in Los Alamos, New Mexico. He later moved with his family to Fairfax Virginia. Andrew spent his early school-aged years at Key Center and then, from age 13 to 22, at the Benedictine School in Ridgeley, Maryland. As an adult, he joined the L’Arche Homes for Life community in Washington, DC. Andrew is survived by his mother and step-father Roberta and Richard Theis, his father and step-mother Bob Commisso and Denise Leith, his sister and brother-in-law Sarah and Andrew Armstrong, and his niece and nephews Hannah, Ian, and Drew. He was pre-deceased by his brother David Andrew Commisso. Andrew was blessed with two families, his biological family and his L’Arche family. Andrew enjoyed time with both families, often at the same time. With his biologic family, he loved vacationing; beach trips to Ocean City, holiday celebrations in North Carolina at his sister’s home, and annual trips to Disney World. Day to day, Andrew thrived with friendships of core members and assistants at L’Arche, where he lived since 2004. He also took retreats with his L’Arche family to many places, including the Shenandoah Mountains, Pennsylvania, North Carolina beaches and Richmond. Andrew participated in the University of Maryland’s Best Buddies program, where Andrew and UMD students would shoot hoops and walk around cam pus together. He, especially enjoyed visiting the Jim Henson statue and memorial garden. Andrew was an active parishioner at the Shine of the Sacred Heart Church where he faithfully attended Mass nearly every Sunday, making friends and sharing hugs. As a young child, Andrew was full of life, light, and mischief. He loved to hide in department stores amidst clothing racks, to see the funny panicked looks on his parents’ faces. He liked to jump onto elevators as the doors were closing, to watch his family sprint madly to catch the doors before they closed, whisking him to an unknown floor. He loved escalators, merry go rounds, and for some reason – crying babies were hysterical to him. Even as his mobility declined, his sense of mischief and love of laughter continued, often manifesting as a random fake laugh when all was quiet – just to break the silence and bring everyone back to the moment. Andrew’s love of Sesame Street is known to all who knew Andrew. He taught us all the lessons of each Sesame Street character. Andrew showed us how to view every day as a new adventure like Elmo, how to love others like Big Bird, how to treat best friends like Bert and Ernie, and – well, if you didn’t read his book EXACTLY as he wanted – you might learn the lessons of Oscar the Grouch. Dispensing with formalities, Andrew pulled strangers close to each other by joining their hands even if they were shy to do so themselves. Andrew was authentically committed to the human bond, delighting in the new friendships he created, and celebrating each handshake with a happy dance. Andrew was a gifted host, and his hospitality was boundless. Even a reluctant guest at dinner might find themselves pulled by Andrew’s vice-like grip into his space to share a video, or a story, or more handshakes. That same guest might later recall that dinner as one of the most meaningful moments of their life, a moment they felt truly accepted and loved for exactly who they were. So rare are those moments, yet these moments are the threads that make up the quilt of Andrew’s whole life. Prior to his passing, he was able to communicate with countless people from his biological and L’Arche families, singing songs, reading books and sharing final smiles with the people he loved dearly and who loved him in return. His family was at his side in his final moments, singing Sesame Street songs, retelling stories of times spent together and giving him endless hugs. Andrew was not alone in death as he was never alone in life; he received all the blessings of the years of love and caring that he gave. We can all take comfort in knowing that Andrew loved people so deeply and freely – setting a prime example of unconditional love. He welcomed each of us into his life while sharing the lessons of patience, humility, persistence, and connection. In lieu of flowers, Andrew’s family requests donations to L’Arche-GWDC.org, where Andrew spent his adult years in community with people with and without disabilities, who loved him as a brother. Memorial services are planned for April 28th at the Shrine of the Sacred Heart in Washington DC at 10:00 am, with a short reception to follow. His remains will rest at Guaje Pines Memorial Cemetery, alongside his brother David, in Los Alamos, New Mexico.
See more See Less

In Memory Of Robert Andrew Commisso