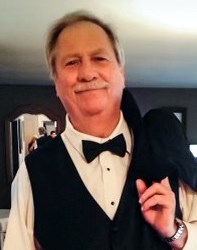 Richard W. Marshall, age 71, of Washingtonville, New York, passed away on Sunday, January 16, 2022. Richard W. Marshall was born on July 15, 1950 in the Bronx, NY. He started his career at Remington Arms in Ilion, NY, where he married his first wife and had his first child. Following his first wife's death, he moved to Rockland County and started his career at the NY State Thruway. Richard met his wife Jane at a disco where they instantly connected and started their life together raising their three children. During his lifetime, Richard enjoyed fishing, hunting and camping. Richard was a Lifetime member of Black Rock Fish and Game Club and a member of the NRA. Most importantly, Richard was a loving husband, father (including to many dogs), grandfather and friend. Richard W. Marshall is predeceased by his father William F. Marshall and is survived by his beloved wife Jane E. Marshall, his devoted mother Joan V. Marshall, caring siblings Kathleen (James) Thornton and Lawrence (Linda) Marshall, loving children, Joanne (Tom) Bisconti, Richard Marshall II, John Paul (Kimberly) Marshall, and adoring grandchildren, Brett (Erika) Bisconti, Brittany (Alex) Monaco, Brianna (Jim) O'Mara, Brianna Bisconti, Lauren (Brian) Annunziata, Cody (Jordan) Dembiec, Toni-Ann Annunziata, Kylie Marshall, Peyton Marshall, Owen Marshall, and Zoë Marshall and his four-legged child, Murphy Marshall. A visitation for Richard will be held Thursday, January 20, 2022 from 5:00 PM to 7:30 PM at David T. Ferguson Funeral Home, 20 North Street, Washingtonville, New York 10992. A funeral service following visitation will occur Thursday, January 20, 2022 from 7:30 PM to 8:00 PM. A private cremation service will occur Friday, January 21, 2022. In lieu of flowers, memorial contributions in Richie's name can be made to: St Jude's https://www.stjude.org/donate/donate-to-st-jude.html?sc_icid=header-btn-donate-now Fond memories and expressions of sympathy may be shared at www.davidtfergusonfh.com for the Marshall family.
See more See Less

In Memory Of Richard W. Marshall