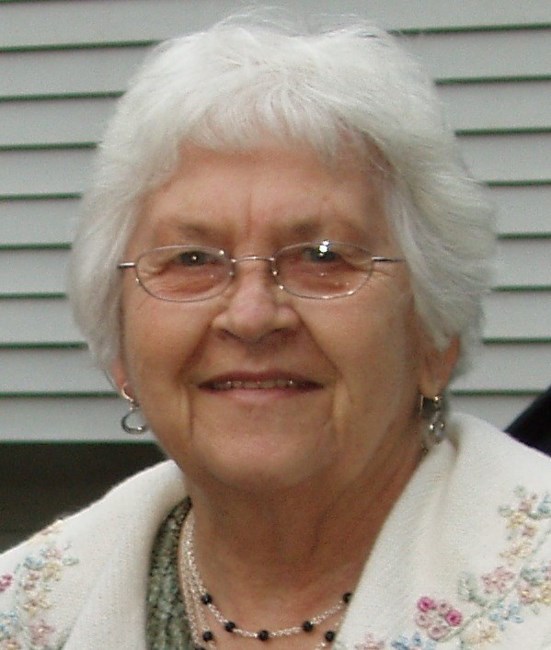 Constance St. Peter Audet, 91, passed away peacefully on July 30, 2022, at her residence at Huntington Common in Kennebunk after a brief period of declining health. Connie was born on December 5, 1930 in Waterville, Maine and was the eldest child of the late Arthur and Louise (LaPlante) St. Pierre. She grew up in Waterville and was a graduate of the Waterville High School Class of 1948. After high school, Connie worked as a bookkeeper at WB Arnold Company in Waterville and then at Hollingsworth & Whitney Company in Winslow. It was at that time that she met the love of her life, Leon Audet. Connie and Leon dated for two years before getting married at St. Francis Church in Waterville on September 3, 1955. Due to Leon’s job, the couple moved to Presque Isle, Maine and then to Hampden, Maine before returning to Winslow where they purchased their first home on Belanger Street and began to raise their family of four boys. Connie was a stay-at-home mom before serving as the parish secretary for five years at St. John the Baptist Catholic Church in Winslow. The Audet family enjoyed annual summer camping trips to Sebago Lake State Park as well as several adventures to upstate New York, the White Mountains of New Hampshire, and various Canadian Provinces. During hot summer days, Connie would often take the boys for the day to the family’s camp on China Lake. She also served as a Cub Scout Den Leader for three years. During the winters, Connie would join Leon and the boys on the ski trails at Saddleback and Squaw Mountain, where on one occasion, Connie and her sister Jeannine lost track of time while chatting and forgot to disembark the chairlift, forcing a quick shutdown before the two embarrassed women were manually lowered to the safety ramp. When Leon retired in 1977, he and Connie ventured into a small bookkeeping and accounting business which operated in the basement of their Belanger Street home. During that time, Connie acquired an interest and eventually a passion for genealogy. She spent countless hours researching and documenting both hers and Leon’s ancestry. As the boys moved out on their own after college, Connie was instrumental at helping each of them get settled into their new homes, beginning with Alan in Hampden, Lee in Keene, NH, Jay in Wells, and Kerry in Portland. For a few years, Connie and Leon gave winters in Florida a try, but realized they preferred to stay in Maine year round to be closer to their four sons and their growing families. After selling their home in 1987, Connie and Leon moved to Meadow View Lane and eventually to Private Drive in Winslow. Now living within walking distance of Winslow Elementary School, Connie began to volunteer two days a week there and continued to do so for three years. Connie and Leon enjoyed hosting the family for holiday gatherings, trips to visit the family, lunches at local restaurants, puzzle making, and cross stitching together. When Connie’s husband developed dementia, requiring him to be admitted to Togus VA Hospital in 2011, Connie visited him weekly until he passed away in 2015. She would eventually sell their home in Winslow and moved to an assisted living facility in Kennebunk in 2012. Connie is survived by four sons, Alan and wife Bonita of Tacoma, Washington, Lee and wife Jennifer of Keene, New Hampshire, Jay and wife Karen of Cape Neddick, Maine, and Kerry of Casco, Maine; her sister Jeannine Belanger of Winslow and brother, Robert St. Pierre; her grandchildren, Adam Audet, Erin Audet, Ryan Audet and wife Savannah, Kyle Audet and wife Christa, Kimberly Henderson and husband Nolan, Josh Audet and wife Mattie, Nick Audet, Cameron Audet, and Mackenzie Audet and wife Ashley; and five great-grandchildren. Connie’s family would like to express their sincere gratitude to the staff at Huntington Common as well as Northern Light Home Care and Hospice for their kindness to Connie, especially during her final days. A Mass of Christian Burial will take place on Saturday, August 13 at 11 AM at St. John the Baptist Catholic Church in Winslow. Burial at the Maine Veterans Cemetery in Augusta will take place at a later date. In lieu of flowers, donations can be made in Connie’s memory to Maine Parkinson Society, 146 Parkway South, Suite 210, Brewer, Maine 04412 Arrangements are under the care of Veilleux and Redington Funeral Home, www.veilleuxfuneralhome.com.
See more See Less

In Memory Of Constance Audet