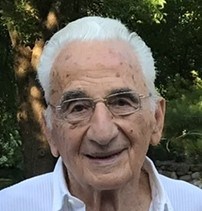 Des Moines Sam Jaquinta died peacefully at the Gardens at Luther Park at the age of 99, just a month shy of his 100th birthday. Visitation will be from 10 to 11 a.m. Tuesday, August 2, 2022 at McLaren’s Chapel in West Des Moines followed by a private family graveside service at Resthaven Cemetery. Sam was born in Des Moines, IA in 1922. He attended Lincoln High School and helped in the family-owned produce markets until joining the Army Air Corps during WWII. After serving in the Army, he continued working in the family grocery business and married Peggy Foley. He was then hired by Hinky Dinky Superstores as an employee and eventually became general manager. Sam also started doing TV commercials for the company. He never met a stranger, always greeting people with a big smile and “Hello! How are you doing?” His customers loved him; employees respected him and loved him as a boss. Sam always treated people as his equal. He was dedicated to his family, his church and his company. Sam was an avid walker at Waterworks in Des Moines. His friends and acquaintances saw him daily as he made his trek around the park. Sam is survived by daughters, Linda (Rod) Davis and Nancy Jaquinta; grandchildren, Jeff (Maria) Davis, Neena (George) Archontis; great grandchildren, Sela and Drake Davis; and nephew, Charles Russo. He was preceded in death by his wife of 62 years, Peggy; parents; James and Mary Jaquinta; sisters, Katherine Russo, Tressa Parkecooper and Rose Jaquinta; brothers, John, Joe and Frank Jaquinta. Special thanks to the staff and health care providers at Luther Park and Moments Hospice for the loving care that they provided to Sam over the past two years. Your kindness and care are appreciated so much. Memorials may be directed to Moments Hospice.
See more See Less

In Memory Of Sam Jaquinta