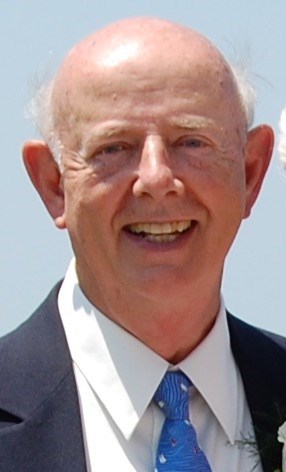 Dale H. Wentzel, 85, of Yarmouth Port passed away peacefully on March 6 with his wife, Maryanne Desmarais, her daughter, Pamela Desmarais, and dear friends, Jackie and Bob Petrie, by his side. Dale was the beloved husband of Maryanne Desmarais. He is survived by his son, Dale Jr. and his wife Johnna Wentzel of Englewood, FL; his son, Mark and his wife, Suraiwan Wentzel of Brandon, FL; his daughter Wendy Beth and her husband Daniel Greenberg, of Bristol, CT; his six grandchildren and six great-grandchildren. He is also survived by his brother Robert Castiglione and wife, Marilyn of Sarasota, FL and was predeceased by his brother Jack and first wife, Joan. He is also survived by many loving nieces and nephews and dearest of family friends, Noi Sriwanblen and son, Jonathon. He also will be deeply missed by Maryanne’s children, Pam Desmarais and Dennis O’Connor, Ken and Michelle Desmarais and Brad Desmarais and Michele Coviello, six cherished grandchildren and finally his tug-of-war buddy, Baxter. Dale grew up in Greenwich, CT. After graduating from high school, he received his Bachelor of Science degree from Southern Connecticut State University and Master of Science degree and Professional Diploma in education from the University of Bridgeport. He served two years in the army and completed many more years of education at the University of Connecticut. Dale’s professional career focused initially in public school education. He started as a teacher in Greenwich in 1954. He then taught in Ridgefield, Connecticut, eventually becoming principal of Rochambeau School in Southbury, Connecticut in 1967. Dale ultimately became an Assistant Superintendent in Bristol, Connecticut where he worked until his retirement from education in 1986. Dale further continued his career as Vice President of Ferraro Enterprises, in Bristol. He retired in 2006. Dale was a constant source of energy and direction in youth development outside of public education. He directed camps around Connecticut throughout his career and most notably was owner and director of Camp Muskogee Day Camp in Greenwich, Connecticut. Dale had a deep passion for sports participation. He enjoyed swimming and wrestling in his youth and continued with softball, fishing and billiards in later years. Dale was a proud member of the Cape Cod Senior Softball League for many years, where he played until the age of 82. And in 2014, he medaled in the Massachusetts Senior Olympics in the discus event. He was an active volunteer his entire life, providing leadership and community service to Bristol Lions Club, American Red Cross, Salvation Army, United Way, Harwich Port Library and more. He loved to draw cartoons and collect stamps. He was a kind and thoughtful man and a very good friend. He will be deeply missed. Please remember Dale with an act of kindness or generosity to someone in need. Family and friends will gather to honor and remember Dale’s life. On Friday March 9, visitation will be held at Doane, Beal and Ames Funeral Home, 260 Main St(Route 28) in West Harwich from 8 to 9:30 a.m. A Mass of Christian Burial will be held at Holy Trinity Church, 246 Main St( Route 28) in West Harwich at 10 a.m. immediately following.
See more See Less

In Memory Of Dale Henry Wentzel