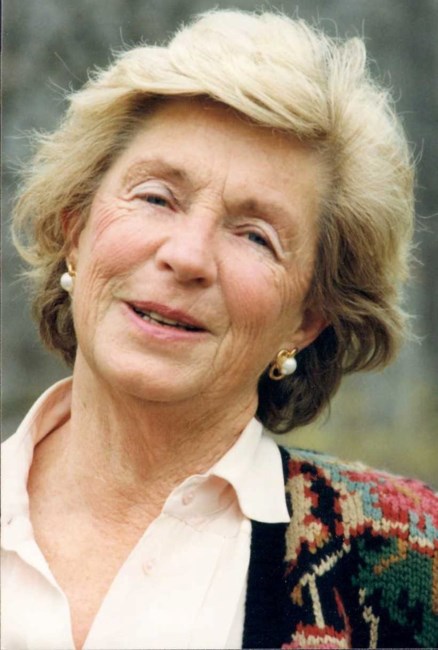 Blanche Wagner Del Deo, 95, longtime Palm Beach resident, passed away peacefully January 16, 2023 surrounded by loved ones. She leaves family and many friends with indelible memories of a wonderful life filled with love and an untiring caring, compassion for all whom she met. She had a lovely, gracious presence. Born in Sidney, Ohio, on July 17, 1927, to parents Philip and Blanche Wagner, owners of the cast iron cookware company Wagner Ware, Blanche was a graduate of Sacred Heart Academy in Cincinnati and Duchenne in New York City. Blanche was also an adventurous outdoorsperson who exceled at riding a horse, hunting, raising world-class AKC English Pointers, mastered the game of golf, and even won The Silver Sailfish Derby of the Palm Beaches in the 1950’s one of Florida’s oldest and most prestigious Sailfish Tournaments. Blanche and husband Ralph toured the world as Ralph judged dog shows in multiple countries and the United States. Blanche’s real love, though, was for her husband of 75 years, Ralph N. Del Deo and her four children Blanche Vilade of Jacksonville Fl; Katherine “KT” Catlin of Palm Beach; Nicholas Del Deo of Bedminster NJ; and Julia Campazzi and her husband Dr Earl Campazzi of West Palm Beach. She also leaves fond memories with her 9 grandchildren, 17 great grandchildren and 2 great great grandchildren. “When my arms can’t reach my grandchildren, I hug them with my prayers” is heartfelt and sent to John (Cristi) Vilade; Christie (John) McElwee; James (Jennifer) Vilade; Nicholas (Wei) Del Deo; Douglas (Sara) Del Deo; Kristin (Shawn) Kirk; Matthew Vilade; Timothy (Danielle) Catlin; and Gregory Del Deo. Blanche and Ralph were a couple made in Heaven. Ralph proclaimed love at first sight and Blanche confided that he was the man she was going to marry. The Palm Beach Daily News publication detailed their love of life and one another in a recent feature article. Blanche lived and raised her children in Bedminster, New Jersey where she was very active in her community and charities. Blanche was instrumental in the building of Bedminster’s Clarence Dillion Library. She helped many families find a home in her beautiful Somerset Hills as an accomplished and successful Realtor. Blanche was also involved socially in the Palm Beaches and the Treasure Coast. She and husband Ralph wintered in Palm City and Jupiter, Florida before permanently locating in Palm Beach. Her ability to organize, bring people together, and dedication to various organizations was demonstrated untiringly. She was especially passionate and proud of her time spent serving on committees for several New Jersey Kennel Clubs and as a Delegate to the American Kennel Club (AKC) where she served on committees and represented clubs across the country. Ralph and Blanche Del Deo are the founders of the Ralph and Blanche Del Deo Scholarship. This endowed scholarship was established to provide financial assistance to students at the Rutgers Law School where Ralph was a graduate. With a flair for community theatre in their early married life, the Del Deo’s greatest performance was on the stage of life where neither was a soloist, but both were center stage in all that they endeavored. Blanche, even in passing, leaves a legacy of starting conversations that will continue to be engage everyone who met her with memories they will never forget. A special thank you goes out to all friends who supported the family through this difficult time as well as her care givers Peggy Boothe, Heidi Jenkins, Gabrielle Hernandez and the nurses from Trustbridge and Campazzi Concierge Medicine. Services will be held 10 AM, Friday January 20, 2023 at St. Edwards Catholic Church 144 N County Rd Palm Beach, Fl. A repast will be held immediately following at a location yet to be confirmed. Donations may be sent in lieu of flowers to the Lords Place in West Palm Beach.
See more See Less