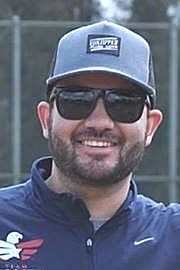 Daniel "Dan" Manrique, age 33, of Thousand Oaks, California passed away on Wednesday November 7, 2018. Dan was born August 5, 1985 in Mexico to Elsa (Franco) Manrique and Mario Manrique. Dan is survived by; father Mario Manrique and mother Elsa (Franco) Manrique; sister Gladys (Manrique) Koscak, brother Marcos Manrique, sister Gabriela Manrique; brother-in-law Adam Koscak, niece Sophia Koscak, and nephew Mateo Koscak. Dan is also survived by grandmother Elsa (Morales) Franco, and countless aunts, uncles, and cousins. Dan Manrique was a Marine Corps veteran who served with 2nd Combat Engineer Battalion, 2nd Marine Division, as a Radio Operator, and deployed to the Middle East in 2007 with the 26th Marine Expeditionary Unit. Dan was stationed at Camp Lejeune, North Carolina and then at Twentynine Palms, CA. After his honorable discharge, Dan pursued with Bachelors and Master degrees through Full Sail University – both in Entertainment Business. He held positions in the entertainment world and then transitioned to the financial planning industry. One of Dan’s most recent roles was with a Los Angeles based nonprofit, as the program manager for the veteran representative payee program helping veterans, with a dual diagnosis, learn to manage their VA and SSA financial benefits. Dan’s passion, throughout most of these roles, continued to be working with Veterans. He connected with Team Red, White, & Blue in 2012 and ultimately served as the Chapter Captain for the Ventura County Chapter of TeamRWB beginning in 2014. In October 2018, Dan accepted a paid position with TeamRWB as the Pacific Region Program Manager, only a few weeks before his passing. Dan enjoyed being active, finding opportunities to learn and grow, and connecting with all of the great things happening in the community. On his time off, you could find him hiking, biking, photographing, learning the craft of brewing with his friend (and ultimately starting O’Brique Brewing Company, with a mission to become a beer brand recognized as one that gives back to the community with an emphasis on veterans), and watching his favorite sports teams. He was an avid Dodger fan, and had a dream of visiting as many baseball stadiums as possible. You could also find him playing with his niece & nephew – looking for ladybugs, playing ball, and pretending to be superheroes. A visitation for Dan will be held Friday, November 16, 2018 from 10:00 AM to 1:00 PM at Valley Oaks-Griffin Mortuary located at, 5600 Lindero Canyon Road, Westlake Village, CA 91362, followed by a funeral service at Calvary Community Church is located at, 5495 Via Rocas Westlake Village, CA 91362 at 3:00 PM. There will be a dove release at 2:30pm, outside of Calvary, before the service. Service will be streamed by Calvary Community Church: https://calvarywestlake.churchonline.org/ In lieu of flowers, please consider donating to TeamRWB in memory of Dan. https://www.teamrwb.org/donate/ Fond memories and expressions of sympathy may be shared at www.piercebrothersvalleyoaks.com for the Manrique family.
See more See Less

In Memory Of Dan Manrique