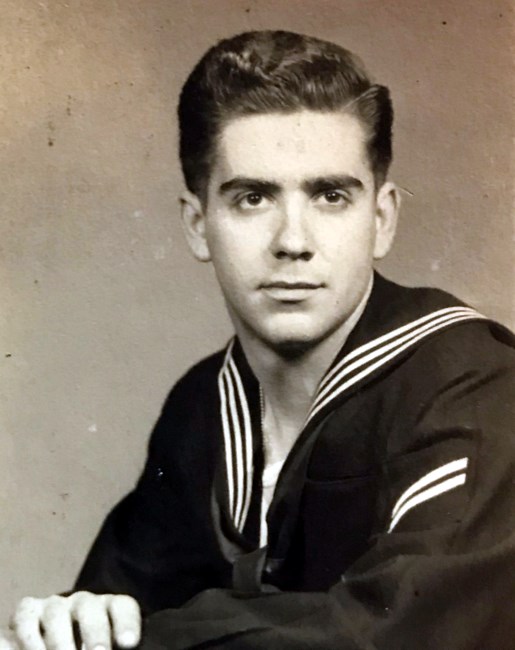 Walter J. Bilz, 91, of Park Ridge, NJ, passed away on Friday, January 20, 2023. He was born in Westwood, NJ, on March 3, 1931, to William and Anna Mary Bilz. Walter is survived by his daughter, Ellen M. Heasley and her husband Kirk of New York, NY. He is predeceased by his son, Stephen J. Bilz, and loving wife of 64 years, Patricia E. Bilz. He is survived by many cherished cousins, nieces and nephews. As a Third Class Petty Officer in the United States Navy from 1952 to 1954, Walter served as an electricians mate on the USS Antietam, the world’s first carrier with a true angled flight deck, and was awarded the National Defense Service Medal (NDSM) established by President Dwight D. Eisenhower in 1953 (Executive Order 10448). He met his wife Patricia (née Clifford) through a coworker of Patricia’s at Metropolitan Life, New York, NY. They were married in November 1954 – three months following his Honorable Discharge from the U.S. Navy. In 1959, they moved to Park Ridge where he resided for the last 63 years, 59 of those years with Patricia. Walter built a long and prestigious career upon the electrician training that he received in the U.S. Navy, significantly adding to his craftsmanship with both electrician apprentice training with the International Brotherhood of Electrical Workers in 1960 and an Associate’s Degree in Electronics from Fairleigh Dickinson University in 1963. As a lifelong highly skilled union electrician, he was renowned for his ”electrician’s handshake.” His work in the International Brotherhood of Electrical Workers/Local Union 3 brought him to the top of the first World Trade Center complex when under construction in the 1970s as well as to the top of the famed Rockefeller Center Christmas Tree, where he once deftly climbed a ladder to the highest boughs of the tree to change a string of bulbs that had gone out. Other famed arenas at which he worked on electrical construction and installation projects include the original Madison Square Garden; the 1964-1965 New York World’s Fair at Flushing Meadows Corona Park in Queens; the USTA National Tennis Center in Flushing Meadows in Queens, home of the US Open and Arthur Ashe stadium court; the New York City subway system; and multiple commercial buildings in New York City – first as a Journeyman Electrician and subsequently as Sub Foreman responsible for the supervision of a team of electricians. Walter was an active parishioner at Our Lady of Mercy Catholic Church in Park Ridge, where he was a member of the Adoration Society and a baritone singer in the choir. He was a volunteer in the physical therapy department of the Veterans Memorial Home in Paramus, NJ, for more than 15 years after his retirement. Walter was known for his keen sense of humor and warm laugh – as well as his wonderful storytelling – which he shared to the delight of friends and family his whole life. A true officer and a gentlemen, he was always very smartly dressed in suit-and-tie or stylish casual wear. He enjoyed life immensely. It was truly an honor and a joy to have the pleasure and privilege to meet him and to know him. And to meet him was to know him. Dedicated and devout, he was a loving and steadfast husband and father, a patriarch of families, and a friend to all. Rest in peace. Amen. Visitation will be at Becker Funeral Home, 219 Kinderkamack Road, Westwood NJ on Thursday, January 26 from 2pm to 4pm and 7pm to 9pm.The Funeral Mass will be at Our Lady of Mercy Church, 42 Pascack Road, Park Ridge, NJ on Friday, January 27 at 10am. Interment will follow at Ascension Cemetery, Airmont, NY.
See more See Less

In Memory Of Walter J. Bilz