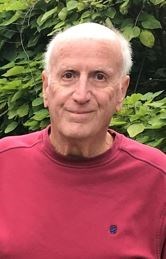 On August 5, 2022, Bruce DiCicco passed away after a brief illness. He was the beloved husband of Jo-Ann Norris. Bruce was born on August 5, 1943 in Cambridge MA. He was the first born of Giordano Bruno and Ruth (Thompson) DiCicco. He lived with his mother and her parents until the return of his father 3 years later from duty in World War II. At age 8, the family moved to West Hartford. Throughout his school years and beyond, he loved playing all kind of sports and approached them with a competitive spirit. He liked Softball, Flag Football, Handball, Volleyball and Racquetball, but he loved Golf. He enjoyed playing, but he also enjoyed helping others when they were having difficulty and he was thrilled when their game improved. He was a particularly great chipper and putter. Bruce never lost sight of the importance of a good education. He received a Bachelor’s Degree in Electrical Engineering from UCONN and he was proud that he was able to pay for it through many summer jobs. He went on to do graduate work at Trinity College in Physics. He started his career at Chandler Evans (Triumph) in West Hartford in the Aerospace Industry. He retired from there after 39 years of service. He worked on a variety of control systems for aircraft, helicopters, missiles and guided bombs and projectiles. He also enjoyed some quiet activities. He was an avid reader, crossword puzzle solver and a gardener. He loved to putter around outside and feel the warmth of the sun. Bruce enjoyed watching his Red Sox, the NY Giants and UCONN Basketball, in particular the Women’s team. He attended quite of few of their Final Four games around the country. Travel was another of Bruce’s passions that he shared with Jo-Ann. They traveled all across the United States and Canada. It was usually a combination of golf and National Parks. He so enjoyed history and natural wonders always trying to satisfy his thirst for knowledge. Bruce had a magnetic personality. People enjoyed being in his company. He loved gatherings of family and friends. Most of all, he liked parties. He was always the first to arrive and lend a hand to set up the event and the last to leave. Of course, he was always ready to tell a humorous story…for which he was famous. His absence will certainly be felt. Bruce is survived by his love of his life, Jo-Ann Norris. He is also survived by his children, Christine (Andy) Krall of Colorado and grandchildren, David and Taryn Krall and his son, Brian DiCicco of West Hartford; his sister, Carol (Alan) Chapin of Milford; nephews, Jeff (Elisa) DiCicco and Joe DiCicco of West Hartford; his niece, Sandy (Marc) Potyrala of Cheshire and nephew, Greg (Heather) Chapin of Milford; nephews, Craig (Kathy) Norris of PA and Joe (Andrea) Norris of Ottawa Canada and niece, Beth (Bud) Randa of NY, along with several great nieces and great nephews. Bruce has a few special friends that played an important role in his life, Vinny and Brian McCain of Plainville and Pat and Mike Phillips of Scottsdale, AZ. They will all surely miss him dearly. Bruce was predeceased by his parents, Giordano Bruno and Ruth DiCicco; his brother, Richard DiCicco; in-laws, Joseph and Estelle Norris, Tony Norris and Charlie (Jeanne) Norris. The family would like to thank UCONN Health Doctors, Nurses and Staff for combining their expertise for the best possible care for Bruce. A special Thank You to the Hartford Hospital Emergency Room Trauma Team for the compassion they demonstrated to Bruce and his family at a difficult time. Please come and celebrate a wonderful life story on Friday, August 12 from 11 a.m.-1 p.m. at the D’Esopo Funeral Chapel, 277 Folly Brook Boulevard, Wethersfield. Casual dress and Golf Shirts are encouraged. Sharing a Bruce story with would be a fabulous way to honor his memory. In lieu of flowers, feel free to donate to his favorite charities: The Jimmy Fund, P.O. Box 849168, Boston, MA 02284-9168 or St Jude Children’s Research Hospital, 501 St. Jude Place, Memphis, TN 38105. To share a memory of Bruce with his family, please visit www.desopofuneralchapel.com.
See more See Less

In Memory Of Bruce DiCicco