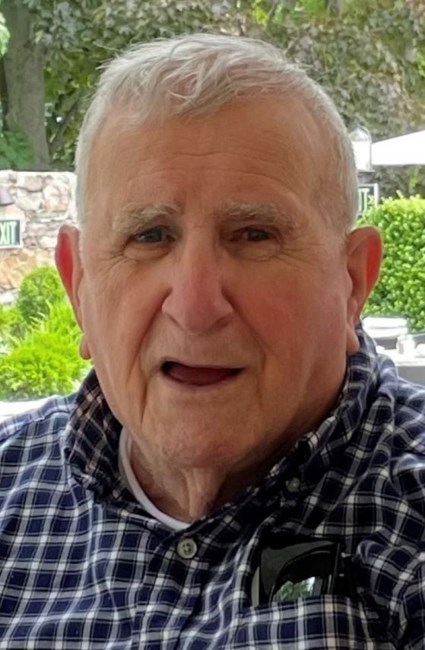 Richard Francis Gliwa, 96, husband of the late Dolores (Nelson) Gliwa, passed away on September 21, 2022 at Middlesex Memorial Hospital. Richard was born on October 31, 1925, the son of the late Hedwig (Czerwinski) Gliwa and Joseph Gliwa and was raised in Brooklyn, NY. Richard’s first job was as a messenger for Western Union in New York City, delivering telegrams by bicycle. His favorite Western Union story was delivering a telegram to Frank Sinatra. As World War II erupted, Richard enlisted at age 17, taking a position as a Fireman First Class for the U.S. Navy. He was most notably stationed in the Philippines on the USS Tabberer, a John C. Butler-Class Destroyer Escort. Richard was not only a survivor of the war, but also the December 1944 Typhoon named Cobra in the Pacific Ocean. Richard was the recipient of several awards, including the Navy Unit Commendation, American Campaign Medal, European-African-Middle Eastern Campaign Medal, Asiatic-Pacific Campaign Medal with four Bronze Stars, World War II Victory Medal and Philippine Liberation Medal. After the war, he moved to Portland, CT and was an assembler for Standard Knapp in Portland for 42 years until his retirement. Richard was also an Auxiliary Police Trooper for the town of Middletown while he worked for Standard Knapp. After his retirement, he was a part-time driver for Napa Auto Parts in Middletown. Richard enjoyed his Tuesday breakfasts with his friends at O’Rourke’s Diner, reading the newspaper, working on his puzzles, stamps, culinary pursuits and traveling. Richard resided in Cromwell for many years and was a member of St. John’s Church in Cromwell. In addition to his late wife, whom he shared 63 years with, Richard leaves two daughters, Sharon Conaci and her husband Tony of South Windsor and Carolynne Thomas and her husband William of Cromwell; six grandchildren, Jessica Holder and her husband Timothy of Clover, SC, Scott Judson of Lebanon, TN, Ariane Thomas and husband Stephen MacDonald of Iowa City, IA, William Thomas of Cromwell, Erika Conaci of Darien and Anthony Conaci of South Windsor, along with two great-grandchildren, Madison and Bryson Holder of Clover, SC. He is also survived by a sister and brother-in-law, Marion and Marvin Thorne of Lake Ronkonkoma, NY; a brother and sister-in-law, Joseph and Marylou Gliwa of Massapequa Park, NY; brother-in-law and sister-in-law, Paul and Pamela Grabek of East Haddam, as well as several nieces, nephews, grand-nieces, grand-nephews, great grand-nieces and great grand-nephews. Richard was predeceased by his two children, Linda and Mark Gliwa; his brother and sister-in-law, Thaddeus and Ursula Gliwa and his sister and brother-in-law, Clementine and Walter Wilga. The family would like to thank everyone at the Village of Kensington Place, Meriden. Richard always had nice things to say about the care they provided to him the last four years. Calling hours will be on Wednesday, September 28 from 9-10 a.m. at the D’Esopo Funeral Chapel, 277 Folly Brook Boulevard, Wethersfield followed by a Mass of Christian Burial at 11 a.m. at St. John Church, 5 St. John Court, Cromwell. Burial with military honors will be in Rose Hill Memorial Park, Rocky Hill. Please consider making a donation in memory of Richard to the Fisher House at www.fisherhouse.org or the Wounded Warrior Project at www.woundedwarriorproject.org. To leave a message for the family or to view the most current service information, please visit www.desopofuneralchapel.com.
See more See Less

In Memory Of Richard F. Gliwa