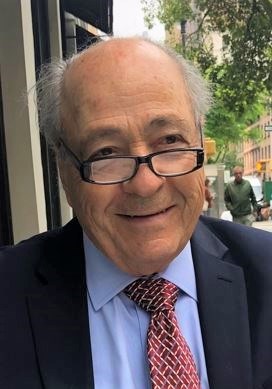 Robert Presutti, Sr., 88, of Durham and formerly Wethersfield, peacefully passed away at home on Thursday, August 4, 2022 surrounded by his loving family. He is survived by his devoted bride of 63 years, Lucia (Motta) Presutti; his son and daughter-in-law, Cristopher and Maribeth, granddaughter Amanda and grandson Andrew; his daughter-in-law, Anna and grandsons Robert and Michael. He also leaves his two very special friends, Jon Morgan of Glastonbury and Dr. Albert Miller of New Mexico. He was sadly predeceased by his beloved son, Robert Presutti. Born in Pratola Peligna, province of L’Aquila, Italy on November 23, 1933, he was the son of the late Laura (DiLoreto) and John Presutti and spent his childhood in Hartford. A graduate of Bulkeley High School, he would later attend Hillyer College and the University of Hartford, where he studied engineering. Robert enlisted in the Unites States Air Force in 1952; his service stations included Okinawa, Texas and upstate New York. After his honorable discharge, he married the love of his life, Lucia, in 1958 and they settled in Wethersfield to raise their two sons, Robert and Christopher, eventually moving to Durham after retirement. Throughout his lifetime of service, Robert would spend his 38-year career with the Connecticut Department of Transportation, managing an array of infrastructure projects across the State and retiring as Director of Documents Processing. Robert was a member of the Wethersfield chapter of the Knights of Columbus and a one-time President of the Wethersfield Lion’s Club. In retirement, Robert was a regular Durham Bridge Club member. One of his true passions was gardening. Having a tremendous appreciation for nature, it was with great care and love he tended his sprawling garden. A lifetime student, from engineering to world history, his insatiable thirst for knowledge and sharp intelligence were traits his grandchildren cherished. Robert was happiest spending time with his family, enjoying countless summers on Cape Cod, passing the time golfing and enjoying the national seashore with his grandchildren. Robert’s impact on those around him was immeasurable, and he will be missed by those he left behind. A Mass of Christian Burial will be celebrated on Monday, August 8 at 10 a.m. at the Church of the Incarnation, 544 Prospect Street, Wethersfield. Everyone is asked to please go directly to the church. Burial with military honors will follow in Rose Hill Memorial Park, Rocky Hill. The family will receive relatives and friends on Sunday from 2-5 p.m. at the D’Esopo Funeral Chapel, 277 Folly Brook Boulevard, Wethersfield. To share a memory of Robert with his family, please visit www.desopofuneralchapel.com
See more See Less

In Memory Of Robert Presutti, Sr.