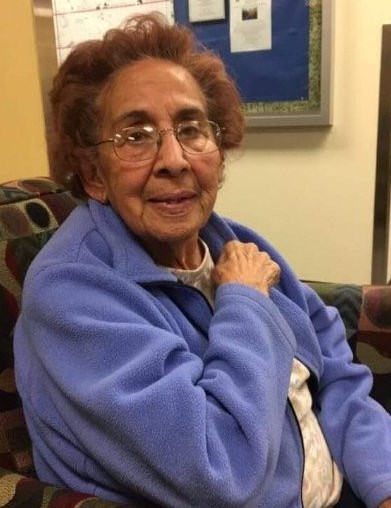 Donna Escareno, 92, passed away on Thursday, January 19, 2023 in Longview, TX. Dominga Arguelles was born the daughter of Francisca Martinez and Anastacio Arguelles on September 13, 1930. Donna, as she would later be called, would be their sixth child. Both her parents came from the state of Chihuahua in Mexico. Working with the railroad, Mr Arguelles moved his family to various railroad towns up through Texas, Oklahoma and finally settling in Eureka,Kansas. It was there in Eureka that Donna and her siblings grew up and attended Eureka schools. Donna played clarinet in the high school band. Donna met her future husband in Eureka. Pete Escareno was the oldest son of the only other Mexican family in Eureka. Pete and Donna moved to Wichita, Kansas to begin their new life together. Pete worked in construction and Donna was in the home caring for their four children, three girls and one boy. As the children grew, Pete would enroll in a business college to better himself to provide for his growing family. The Escareno family added another son in 1968. Donna began working as a nurse aide at St Francis Hospital for many years before transferring to the heart cath department. Donna enjoyed her many years working at the hospital and was considered a loyal and valuable employee. After retirement Pete and Donna traveled around in their motor home. Many trips were spent in México visiting family. Also many travels were visiting many states attending reunions for the 11th Armored Division of which Pete was a member of during the war. Mr Escareño was diagnosed with cancer and passed away in 2012. Since then Donna has been spending time with her children and grandchildren. She moved down to Fort Worth, Texas a couple of years ago to live with her daughter, Frances. They spent time visiting family in Lewisville, Longview and Kilgore. Donna enjoyed spending her Saturday mornings going to garage sales, often with her sisters; hoping for a good bargain. She loved gardening, canning, attending to her flower beds, and spending time with her family. She was a dedicated parishioner of All Saints Catholic church. She was preceded in death by her parents, Anastacio and Francisca Arguelles, siblings, Delfina Tejeda, Petra Walker, Maria Ortiz, Judy Arguelles, Connie Murillo, Pauline Arguelles, Irene Bonilla, Celso Arguelles and Raymond Arguelles. Survivors include her children, Virginia Escareno Lewis (David), Kilgore, Texas; Patricia Escareno Rubalcaba (Guadalupe), Andover, Kansas; Richard Michael Escareno, Sr, Wichita, Kansas; Frances Escareno, Longview, Texas; Peter Christian Escareno (Silke), Wichita, Kansas. Visitation will be from 4 to 6pm on Friday January 27, 2023 at DeVorss Flanagan-Hunt Mortuary, 201 S. Hydraulic, Wichita, KS. Recitation of the Holy Rosary will be 9:30 a.m. on Saturday January 28, 2023 with Mass of Christian Burial following at 10:00 a.m. both at All Saints Catholic Church, 3205 E. Grand St., Wichita, KS. Burial will follow at Greenwood Cemetery in Eureka, KS. In lieu of flowers, memorials can be made to the Sacred Heart Church, 514 N. Elm St., Eureka, KS 67045.
See more See Less

In Memory Of Donna Escareno