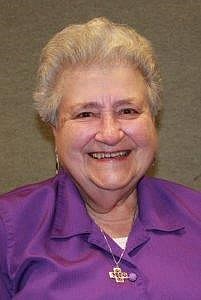 Sister Judith Ann Couturiè Sister Judith Ann Couturiè , 86, a Sister of St. Joseph for over 68 years, entered eternal life January 16, 2023 at Ascension Via Christi St. Joseph in Wichita, KS. She was born in New Orleans, LA. On May 15, 1936, one of four children of J. Andre and Angele Marie Delery Couturiè. Her elementary school years were in parochial schools of the diocese of New Orleans and after completion of high school at St. Joseph Academy in New Orleans. LA she entered the novitiate of the Congregation of St. Joseph in 1955, professing first vows in 1958 and final vows in 1963. She earned a B.A. in Education at St. Mary’s Dominican and an M.R.E. at Notre Dame Seminary in New Orleans. As a teacher, Sister Judy taught in parochial schools from 1958 to 1978 in New Orleans, Baton Rouge and Harahan, LA. She then was principal at Sacred Heart in Baton Rouge for seven years. After that assignment she changed focus and began doing pastoral ministry, first on the Louisiana State University campus for sixteen years followed by thirteen years in rural parishes of the diocese of Baton Rouge. She retired in 2014, residing at the congregational center in Baton Rouge until she moved to Kansas in 2018, living at Mt. St. Mary’s Convent until the end of her life. Preceding her in death were her parents, and her three brothers, Andre’ (Del), James H. and Thomas W. Couturiè. In addition to members of her congregation, she is survived by a number of nieces and nephews. Homecoming is scheduled for Thursday, January 19 at 3:00 p.m. followed by the wake at 6:30 pm. The Mass of Christian burial will be Friday, January 20, at 10:30 a.m. with burial in Mt. St. Mary’s Cemetery to follow. Memorials may be made to the Retirement Fund of the Congregation of St. Joseph or to Dear Neighbor Ministries, 3700 E. Lincoln, Wichita, KS 67218.
See more See Less

In Memory Of Sr. Judith Couturie