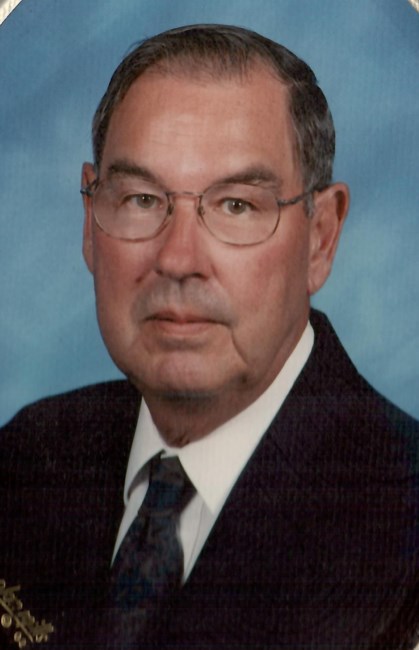 William Edward (Bill) Gustin, 90, retired Boeing Wichita Executive, died July 30, 2022 at Catholic Care Center in Bel Aire, Kansas. Bill was born in Pittsburg, Kansas on February 1, 1932 to Vayne Edward and Thelma Marie Gustin. He remembered family struggles during the depression and recalled becoming a golf course caddy while still a small boy to earn extra money for his widowed Mother and siblings. He married Leota Clark in Berryville, Arkansas on June 25, 1953 and they remained together until her death in 2020. He served in the US Army Reserve in the 1950's and narrowly missed being sent to Korea during the war. Bill spent 38 years with Boeing before retiring in 1994, as Director of Program Management. He was an avid gardener, growing an assortment of vegetables every year. He enjoyed fishing at Table Rock Lake, league bowling with work pals and golfing with virtually anyone. He was especially proud of scoring a hole in one June 9, 1984 on the 13th hole at Hesston Golf Course. In years past, Bill was active with his church and was a Cub Scout and Boy Scout leader. He was preceded in death by his wife of 66 years, Leota, and their baby daughter, Rose. He was also preceded by his parents, sisters Irene Taylor and Margaret Doughty, brother Richard Gustin, Half-sister Jean Weaver and half-brothers Robert Koopman and Terry Swan. He is survived by his daughter Lisa Gustin of Wichita, son Scott (Shelley) Gustin of Bothell, WA, granddaughter Erin (Ben) Grose of Bonney Lake, WA, great grandchildren Ashlyn and Nathan Grose and half-brothers Malcolm Freeburg and Andrew Freeburg. A visitation with family for Bill will be held Wednesday, August 3, 2022 from 4:00 PM to 6:00 PM at Lakeview Funeral Home, 12100 E 13Th St N, Wichita, Kansas 67206. Fond memories and expressions of sympathy may be shared at www.MyLakeviewFuneralHome.com for the Gustin family.
See more See Less