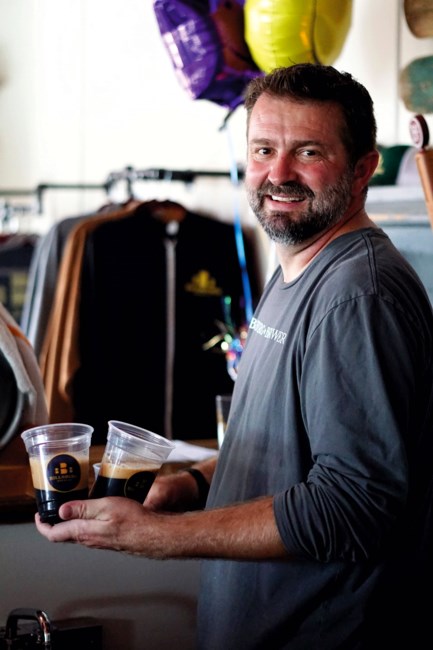 The Williamsburg community grieves the sudden loss of David “Dave” Eisele Baum, who died of natural causes on Sunday, February 9, 2020, much too soon for family, friends, and loved ones. He was only 46 years old. Born in Raleigh, North Carolina, on June 7, 1973, Dave was truly a free spirit. After graduating from J.R. Tucker High School in Henrico, Virginia, he attended Virginia Tech for one year before he decided to “take a break” and follow the Grateful Dead around the country. On his own twenty-third birthday, his daughter Elizabeth Montana was born, which Dave claimed was one of the first turning points in his life. It drove him to pursue an associate’s degree in Information Technology from J. Sargeant Reynolds Community College and he subsequently entered work in the corporate world. Daughters Rylie Elaine and Piper Nicole were born a few years later, and Dave lived with his family in Richmond, until he and his first wife, Nikki, separated and he moved to Williamsburg in 2003. Dave married Kristin in 2007, making her stepmom to the “Baumlets” and mom to many pets over the years, including Elli (Eleanor Rigby) the cat, and most recently, rescue dogs Bear and Lil. In 2008, Kristin gave him a homebrewing system for Christmas, and the pursuit of his next, and perhaps most well-known, dream of one day opening a local brewery began. He brewed beer for friends, special occasions, weddings, and just for fun, but the most special part for him was the presence of friends who showed up on “brew days” to help, who would spend the entire day with Dave. He not only loved to brew, he loved teaching others about craft beer and the process. For five years, Dave and Kristin were blessed with the generosity of countless team members from James City County, Guernsey Tingle Architects, David Nice Builders, and an army of family and friends to bring Billsburg Brewery to fruition in October 2017 when it opened. Originally, Dave’s vision for the brewery was to have a place where people could enjoy craft beer in a family- and pet-friendly environment, a “destination brewery,” as he called it, where people could come not just to drink beer, but to linger and enjoy the events and people at the marina. However, once the brewery opened, the dream grew into a platform for community activism, and he quickly became an advocate for non-profits and social justice. He considered the brewery his legacy for his family, but this evolved into a community wide legacy of kindness and philanthropy. He worked tirelessly to raise funds and awareness for various local organizations through brewery events and collaborations. Dave absolutely adored children and dogs, and of course, loved everyone. Strangers quickly became friends within minutes of meeting him. Going to the brewery felt like going to an extension of Dave and Kristin’s home, as the two carefully curated and decorated the taproom together, and Dave made it a point to welcome you, or stop and talk, no matter how busy he was. He was a complex and intelligent soul, and always had a smile on his face, even if there was more going on that he quietly shared with a few lucky close friends. If Dave could name his successes, the brewery and contributions to the community would be most recent, but topping this list would be his daughters. He talked to Rylie every single day, even if it was just a quick, “hey, kiddo!” Piper, the baby, went to bed with “good night, ladybugs,” one of their many nicknames, painted on the wall over her bed. Montana’s smile and personality are obviously like her daddy’s, noticeable within seconds of meeting her. To say Dave was a lover of music would be an understatement – he loved “educating” others by sharing whatever he was currently listening to, loved taking in local bands and artists, and the radio station in the car was permanently set to the Grateful Dead channel. He taught Kristin and the girls the lyrics and stories behind countless obscure Beatles songs. Dave joins many loved ones in heaven, including his mother, Elaine, and father, Ken. His brother, Ken, tragically was taken from this world too early in 2013. Sammy, Franklin, Juneau, and many other beloved dogs are waiting in heaven for him, too. One of his favorite quotes was by Will Rogers: “if there are no dogs in heaven, then when I die, I want to go where they went.” He will be watching over the family he left here on earth: loving wife, Kristin; daughters Montana, Rylie, and Piper; nephews Jacob and Sam; sister- and brother-in-law Heather and Todd; nephew Isaac David and niece Elaine Margaret; “Mom” Wanda Adsit; and the girls’ mother, his first wife, Nikki Cabaniss. The friends he also considered family are too numerous to name, but he’ll be there in spirit whenever they’re gathered and celebrating life. His family, friends, and patrons will never get to see the many other accomplishments and new adventures he had brewing, but his wish would be that others would be inspired that he took a chance on his dream and made it so much more than he ever thought possible. In lieu of flowers, the family asks that donations be made to one of two charities that Dave held especially close: The Southeastern Virginia Chapter of the Alzheimer’s Association (alz.org/seva) or Heritage Humane Society (heritagehumane.org). Visitation will be on Thursday, February 13, 2020, from 6 to 8pm, and a celebration of life will be at noon on Friday, February 14, 2020. Both will be at Nelsen Funeral Home, 3785 Strawberry Plains Road, Williamsburg, VA, 23188.
See more See Less

In Memory Of David Eisele Baum