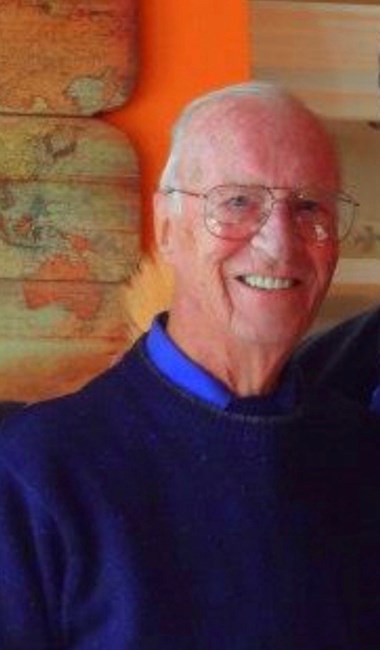 Samuel Ernest “Sam” Patton, Jr., 88, of Williamsburg, VA, passed away November 27, 2017. Born in Philadelphia, PA, he was the son of the late Samuel Ernest Patton, Sr. and the late Agnes Eleanor Woolen. He had a strong passion for the game of football. While at the University of Virginia earning his Master of Education, Sam played varsity football and spent many years thereafter as a highly respected head high school coach in Williamsburg, VA and Saddle Brook, NJ. He proudly served his country as First Lieutenant in the Army. He also served as Mayor of Roxbury Township, NJ. Sam had a successful career as an educator for 20 plus years. During that time he also was a high school administrator responsible for athletic activities and programs at three large high schools in Morris County, NJ. He then went on to own and operate two restaurants in the Shenandoah Valley of Virginia, Brooks Restaurant and Waffle Inn. Sam later served as General Manager of the Fredericksburg Country Club in Fredericksburg, VA for over 10 years. He was President of Country Club Managers of Virginia as well. He is survived by his wife, Mary Skinker Patton; two sons, Samuel E. Patton, III and wife, Renee, of Alpharetta, GA, and Stephen E. Patton and wife, Maureen, of Gloucester, VA; daughter, Patricia P. Gsell of Glen Allen, VA; four grandchildren, Lauren Sanborn, Kyle Patton, Christopher Gsell and Gregory Gsell; sister, Eleanor P. Anunson; numerous great-grandchildren, nieces and nephews. The family will receive friends from 2:00 pm to 5:00 pm on Saturday, December 9, 2017 at The Crossings, 1000 Virginia Center Parkway, Glen Allen, VA 23059 to share in the celebration of Sam’s life. Condolences may be registered at nelsencares.com.

In Memory Of Samuel Ernest Patton