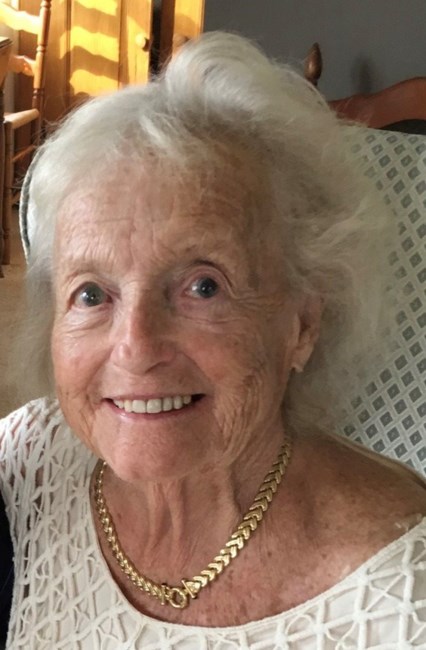 Barbara Berryman Brandt - January 24, 2023, beloved wife of the late Roger W. Brandt Sr.; loving mother of Deborah B. (Greg) Guckes of Greenwood Village, CO; Roger W., Jr. (Mary Jo) Brandt of Pittsford, NY and Edward Carl (Emmaline) Brandt of Garnet Valley, PA; cherished grandmother of Patrick (Elizabeth) Guckes, Sarah (Andrew) Palmer, Ryan (Elizabeth) Brandt, Kylie (Phil) King, Allison (Brad) Bissell, Linnea (Anthony) Spagnoletti, Katherine (Christian) Teeple and Roger Brandt, III; devoted great-grandmother of Fletcher, Sterling and Langston Brandt, Caleb, Judah and Levi Bissell, Adelaide,Nathanael and Grace King, Holden, Wells and Ainsley Palmer, and Eleanor and Noah Guckes; daughter of the late C. Edward and Helen Berryman. The family will be present to receive friends Friday from 4-7:30 PM, at the Perna Dengler Roberts Funeral Home 1671 Maple Rd., Williamsville. Friends are invited to attend a Mass of Christian Burial Saturday, January 28 at 1 o’clock, at St. John the Baptist Church, 1085 Englewood Ave., Buffalo, 14223. Please assemble at church. Memorials may be made to Theodore Roosevelt Inaugural National Historic Site of Buffalo or the Discalced Carmelites of Buffalo. Online condolences may be sent www.denglerrobertspernafuneral.com Barbara Berryman Brandt, 87, led preservation and development of Theodore Roosevelt Inaugural National Historic Site Sept. 10, 1935 – Jan. 24, 2023 Barbara Berryman Brandt, who helped earn federal designation for the Ansley Wilcox Mansion on Delaware Avenue in Buffalo as the Theodore Roosevelt Inaugural National Historic Site, then served for 25 years as its executive director, died Jan. 24 after a short period of declining health. She was 87. As chair of the Junior League of Buffalo's committee for the restoration of the mansion in the early 1970s, she did research on the original furnishings and interviewed members of the Wilcox family. After the U.S. Department of the Interior declared the house a National Historic Site, she became associate curator and then director. When the site was placed under the aegis of the National Parks Department, she was appointed superintendent. Mrs. Brandt built the site's corps of volunteers from six to more than 300 and established its popular Victorian Christmas display, enlisting garden clubs from the area to decorate the rooms. The National Parks Service sent her to other parks around the nation to talk about how she developed the volunteer program. Her work also led to invitations to the White House, where she met former Presidents George H. W. Bush and George W. Bush. After she retired in 1996, she became active in the Theodore Roosevelt Association of Oyster Bay, L.I., served as secretary and was elected chairwoman in 2007. She co-chaired a three-day national symposium, "The Big Stick and the Square Deal: The Presidency of Theodore Roosevelt," in 2002 at Canisius College. She was an ex-officio board member of the Theodore Roosevelt Site, which named its annual Volunteer of the Year Award in her honor. She received the Buffalo and Erie County Historical Society's Owen B. Augspurger Award in 1986 for promoting preservation of local history. The Junior League presented her with its Susan Reid Green Russell Award in 2001. She was recognized with the Theodore Roosevelt Association's Rose Award in 2010. Born in Buffalo, Barbara Berryman was the daughter of a Marine Midland Bank executive and an only child. She grew up in Kenmore, graduated in 1953 from Holy Angels Academy and received an associate's degree in dental hygiene from Erie County Technical Institute, now SUNY Erie Community College. She was married in 1955 to Roger W. Brandt, whom she met at a party on the Lake Erie shore in Canada, where both their families had summer cottages. As their three children were growing, they moved in 1964 from the Town of Tonawanda to Eden, where Mr. Brandt was a branch manager for Marine Midland Bank. Active in Eden, she was a member of the Eden Chamber of Commerce, the Eden Garden Club, the Eden Up to Date Club and the Eden Historic Review Board. She chaired the Eden Bicentennial exhibit in 2012. She also was a member of the Board of Associates of Buffalo General Hospital, the Allentown Industrial Development Committee, the Twentieth Century Club and the Architecture Committee of the Greater Buffalo Convention and Visitors Bureau. A skiing enthusiast, she was a member of the former Red Jacket Ski Club and the Gowanda Country Club. She and her husband were avid travelers and visited 44 countries. For several years, they maintained a winter home in Naples, Fla. After they moved to Canterbury Woods in Amherst in the 2010s, she chaired the welcoming committee. Survivors include a daughter, Deborah B. Guckes; two sons, Roger W. Jr. and Edward C.; eight grandchildren and 14 great-grandchildren. Her husband, a vice president at Marine Midland Bank, died in 2020. A Mass of Christian Burial will be offered at 1 p.m. Saturday in St. John the Baptist Catholic Church, 1085 Englewood Ave., Town of Tonawanda. A visitation for Barbara will be held Friday, January 27, 2023 from 4:00 PM to 7:30 PM at Perna, Dengler, Roberts Funeral Home, 1671 Maple Rd, Williamsville, New York 14221. A mass of christian burial will occur Saturday, January 28, 2023 at 1:00 PM at St John the Baptist Church, 1085 Englewood Ave, Tonawanda, New York 14223. In lieu of flowers, contributions in Barbara's memory may be made to Theodore Roosevelt Inaugural National Historic Site, 641 Delaware Ave., Buffalo, New York 14202 US; and Discalced Carmelites of Buffalo, 75 Carmel Rd., Buffalo, New York 14214 US. Fond memories and expressions of sympathy may be shared at www.DenglerRobertsPernaWilliamsville.com for the Brandt family.
See more See Less

In Memory Of Barbara Berryman Brandt