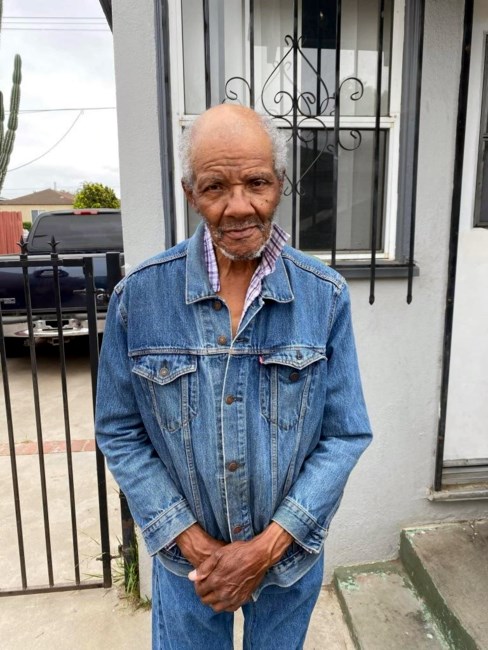 Grover Ernest Broyles was born in Conway, Arkansas on November 15, 1941 to the parents of Helen and "Bill" Grover Broyles who preceded him in life. Grover was the second born. Grover's parents moved to Los Angeles in 1942, where he was raised and educated. As a child growing up, he would say " When I grow up, I'm gonna have "birds and dogs", and that he did. In his younger years, he always had his pets and birds. Upon graduating from High School he enlisted in the U.S. Army and was sent to Germany. Grover served a total of 8 years in the Army. While in Germany he met his wife Helga. From this union two children were born. Later in life, he met his wife Clemmie Alberta Light. From this union he had one son Dennis. Clemmie had 3 children from a previous marriage of which he helped to raise. He's a really loving husband and Father. Grover loved to Garden. He had a beautiful vegetable garden with watermelon's, which he was proud of. He also loved welding and repairing things for others. Repairing fences, making BarBecue pits and many more. Grover was a jack of all trades and good at it. Grover worked for Todd's Shipyard and was proud of it. He retired from there and enjoyed the latter years of his life. His dog will really miss him. Grover leave to mourn- one daughter China Lee and son Grover Broyles Jr. of Worms Germany. Son Dennis and daughter-in-law Lauren Broyles of Torrance. Three stepdaughters Victoria Smith of Barstow, Ca. Denise Smith of Long Beach and Regina Cox of Las Vegas. Two sisters Barbara A. Foster and Margaret Holder of Los Angeles and stepbrother Jerry Broyles of Long Beach. Eight grandchildren all of Worms Germany, four nephews, Terry and Sean Joyner of Compton, Ca. Gary Anderson and Maurice Holder. A a host of extended family and friends. A visitation for Grover will be held Saturday, January 21, 2023 from 3:00 PM to 5:00 PM at Funeraria del Angel Wilmington FD #858, 1640 N Avalon Blvd, Wilmington, California 90744. A funeral service will occur Saturday, January 21, 2023 from 5:00 PM to 6:00 PM, 1640 N Avalon Blvd, Wilmington, California 90744. A burial will occur Monday, January 23, 2023 at 2:00 PM at Roosevelt Memorial Park, 18255 S. Vermont Ave, Gardena, California 90248. Fond memories and expressions of sympathy may be shared at www.Funerariadelangelwilmington.com for the Broyles family.
See more See Less

In Memory Of Grover E. Broyles