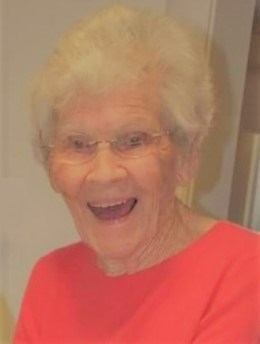 Peggy Kuhn Davis, 95, died Sept. 13, 2022, peacefully at home surrounded by those she loved. Born Bailey Clarice Kuhn on Feb. 26, 1927, in Rocky Mount, NC, she was given the nickname “Peggy” by the nurses at the hospital for a popular song of the time “Peg ‘O My Heart” and the name stuck, later taking it as her legal name. She grew up on her family’s farm off the Penderlea Highway in Burgaw, NC, surrounded by an extended family of aunts, uncles and cousins on adjacent farms. Her love of family would be the foundation and guiding principle of Peggy’s life. She attended Methodist College and summer school at Brevard, earning her bachelor’s degree. Before starting her career as an elementary school teacher, she wanted to experience life in two major cities. She lived in New York City for a year where she worked in a department store and did some modeling. Next, she lived in Washington, D.C. where she worked as a secretary at the Pentagon. She returned to Wilmington, where her parents then lived, and began her teaching career. She met and married Carl Davis who she was married to for 60 years. Together, the couple raised three children. Peggy taught school, primarily as a fifth-grade teacher in New Hanover County, for more than thirty years. Peggy was a founding member of Devon Park Methodist Church in Wilmington, and was an active member for decades, teaching Sunday School, serving on the church board, singing in the choir, mowing the church grounds, baking and working at each fundraiser. She loved her church family and was a life-long member of the small neighborhood church until it was formally dissolved in 2021. Peggy was happiest sharing life with her family and when outside gardening. She also enjoyed music, sewing, and baking. She was always quick to show compassion whether it was ensuring one of her students had a winter coat, being a family caregiver, or adopting the latest stray cat that showed up on her doorstep. Peggy was preceded in death by her husband Carl Norman Davis; parents Orville Bailey Kuhn and Thelma Pope Kuhn; brother William Orville Kuhn; and numerous aunts, uncles and cousins that made up her extended family. She is survived by her three children, daughter Terry Keefer and husband Bob of Wilmington, NC, son Scott Davis and wife Debbie of Leland, NC, daughter Sally Shepherd and husband Jim of Wilmington, NC; three grandchildren, Brian Keefer and wife Heather, Steven Keefer, Laura Keefer; and three great grandchildren, Lily, Ella and Jaxson. A short graveside service at the Mausoleum at Greenlawn Memorial Park will be held on Friday, September 16, at 11am. In lieu of flowers, please consider a donation in Peggy’s name to Lower Cape Fear LifeCare, 1414 Physicians Drive, Wilmington, NC 28401 (lifecare.org). Fond memories and expressions of sympathy may be shared at www.CobleGreenlawn.com for the Davis family.
See more See Less

In Memory Of Peggy K. Davis