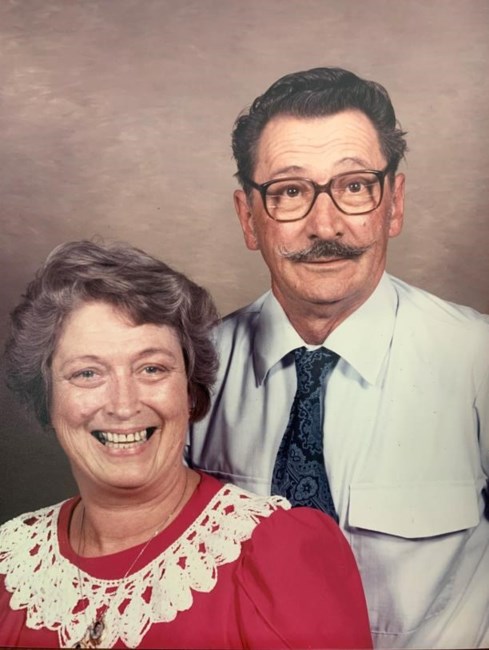 Bobbie Mae (Allen) Hammond (Aunt Mae to her nieces and nephews) passed away on May 9, 2022. A life-long resident of Barrow County, she was born on September 25, 1935, to the late Robert Lee (Dock) Allen and Fellie Marie (McDonald) Allen. Bobbie was the eldest of four children; preceded in death by her brothers, Robert Russell Allen and Royce Wayne "Bud" Allen, and her sister, Joyce Elaine "Jaynee" Hammond. Bobbie was also preceded in death by her loving husband of 52 years, Lee Roy Hammond, and her son, Ricky Lee Hammond. Bobbie is survived by: her daughter, Barbara Ann (Hammond) Taylor; three grandchildren: Ann Marie Taylor, James Vincent Taylor, and Jonathan Lee Taylor; three great-grandchildren: Alexander Grayson Wade, Evelyn Mae Taylor, and Bennett Hawk Taylor; and many wonderful nieces and nephews. Bobbie and her family lived on Holsenbeck Farm. She could tell stories of having to milk the cows and feed the chickens before walking for miles to catch the school bus on the days she was lucky enough to get to go to school. Bobbie only made it to the 8th grade, but was street smart beyond her years. Farm living was hard work, yet she spoke of these memories regularly as she cherished her time with her family, especially her sweet Mom. Asked again at any point in her life whether she missed picking cotton, her response would be, “Lord no!” She missed many days of school due to picking cotton on the family farm. In 1956, Bobbie married the love of her life, Lee Roy Hammond. She courted him from a distance during the four years he was in the Navy. They wrote letters to and from each other the entire time. Her daughter has all the letters her mother ever sent to her father. Bobbie’s father was very strict and would not allow her to date so letters had to be sent to her best friend and first cousin, Martha Belle Stinchcomb (later Gaddis; then Garrett) to keep her courtship secret from her father. Bobbie and Lee Roy had two children: Ricky in March 1959, and Barbara in May 1961. She was the most loving mother to her children. Mostly a stay-at-home mother, she worked for a while at Superior Garment, the cafeteria at Winder Barrow High School, and in the “brick pile”. Her father bought and tore down old brick buildings all over Georgia and beyond. He hired folks to clean the concrete off the bricks using hatchets, and he would then sell them by the truckload to builders. There are many folks in Barrow County to this day that remember old “brick pile” stories. When their son, Ricky, passed away in 2000, it was a devastating blow to Bobbie and her husband and they were depressed by the loss of their son for the rest of their lives. After her husband passed away in 2008, she went to live with her daughter in "the dangerous city of Atlanta". While in Atlanta, Bobbie attended a day program at Sunrise Senior Living in Buckhead, where she would meet her future boyfriend. When an opening was available, she moved to Sunrise to be closer to him and she was there for three years, until she broke her hip. After the surgery, her dementia worsened greatly. She then moved in with her daughter in their home in Winder, where she remained until she went to live at St. Mary’s Alzheimer’s Center in Watkinsville for two years, and finally to High Shoals Health and Rehab for the past two years. Bobbie and her deceased husband, Lee Roy, were members of Morningside Baptist Church and before that, they were members of Union Baptist Church. Bobbie’s hobbies were crocheting, working in the yard, and her grandchildren. Bobbie’s laugh was contagious. Anybody that knew her will tell you, they will never ever forget her laugh and love for life.
See more See Less

In Memory Of Bobbie Mae Hammond