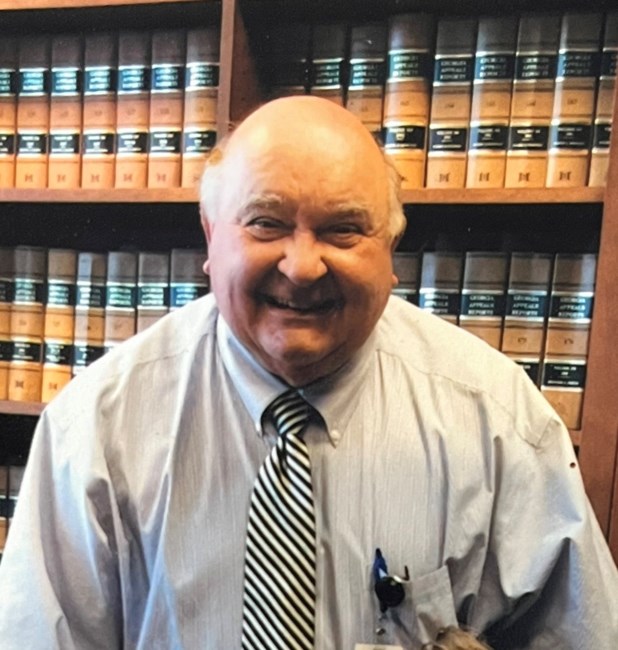 Judge Robert W. "Bob" Adamson, age 80, of Winder, GA, passed away on Wednesday, September 14, 2022. Bob was born September 19, 1941, to the late Winfred "Pop" and Lucille Banks Adamson of Coweta County. He is also predeceased by his brother, Fred Adamson. Bob graduated from Star High School, now called East Coweta High School, and earned a Bachelor of Science in Plant Pathology from the University of Georgia. While at UGA, Bob was also part of the ROTC program and a walk on with the baseball team. After leaving college, Bob joined the U.S. Army and served with the 82nd Airborne Division in the Dominican Republic and later with the 101st Airborne Division in Vietnam, earning the rank of Captain. Upon returning home after completing his service in the U.S. Army, Bob earned a Juris Doctor Degree from the University of Georgia School of Law. Bob then moved to Winder, GA to practice law and was a partner in the law firm that would become Russell, Adamson, and Stell, now known as Russell, Stell, Smith, & Mattison. He was elected Superior Court Judge in 1992 and served in this capacity until 2009. He then was appointed by Governor Sonny Perdue to be Senior Superior Court Judge, a position he held until he retired in 2019. He also started and ran Northeast Georgia Resolution, a mediation and dispute resolution business, until his retirement in 2019. Bob was a member of the Statham Masonic Lodge and attended Midway Christian Church. He was past president of the Barrow County Chamber of Commerce and also served as president of the Winder Rotary Club. Bob is survived by his wife, Nancy Perkins Adamson of Winder, GA. He is also survived by his children: Zach Adamson of Tallahassee, FL, Scot Adamson of Winder, GA, Bart (Tonya) Porter of Hartwell, GA, Patrick (Juli) Adamson of Buford, GA, and Leah (Wesley Martin) Nelms of Loganville, GA; and grandchildren: Jordan Nelms, Cameron Nelms, Jayci Nelms, Clint Porter, Mally Adamson and Lauren "Happy" Adamson. Bob is also survived by his brothers: Charles (Cheryl) Adamson, Dean Adamson, and Jim (Vanette) Adamson all of Sharpsburg, GA. A celebration of Bob's life will be held at 4PM Friday, September 16, 2022 in the chapel of Smith Funeral Home with Revs John Richardson and John Burchfield officiating. The family will receive friends from 1PM until service time at the funeral home. Donations in Bob's memory may be made to Midway Christian Church.
See more See Less

In Memory Of Robert "Bob" Adamson