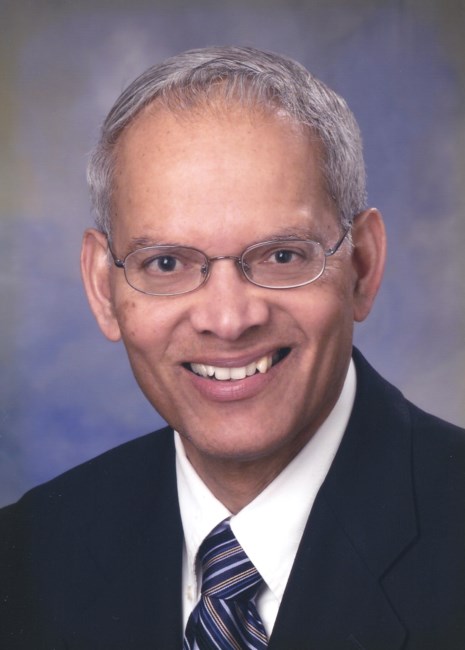 Remembered with Love With sad hearts, we announce the passing of our beloved husband, father and grandfather on January 7th, 2022 surrounded by his family after a lengthy illness. Godfrey was predeceased by his parents Bertie and Daisy Harding. He is remembered with love by his devoted wife, Patricia, his children Gregory (Janey) and Gary (Jason) and his grandchildren Grace, Joshua and Hadley. He will also be missed by his sister-in-law Marilyn, sisters Jessica, Jacqueline, Jennifer, and brothers Goldney, Geoffrey and Gerry. Godfrey was born in Trinidad and Tobago, West Indies, and came to Winnipeg to pursue a career in Medicine. He graduated from the University of Manitoba Medical School in 1969 and then completed a residency in internal medicine. Following his residency, he pursued fellowship training in the relatively new specialty of infectious disease at the University of California, Los Angeles (UCLA). Godfrey was offered a job at UCLA, but felt that Manitoba had done so much for him and he chose instead to return to Winnipeg in 1975. It was here that he started his career as one of the few Infectious disease physicians in Manitoba and in Canada. Mid-career he challenged himself and did an additional Royal College fellowship in Medical Microbiology at the University of Toronto. Godfrey had a stellar academic career. He was considered an international authority on infectious diseases. He authored or co-authored more than 230 scientific peer reviewed papers, including three in the New England Journal of Medicine. He was asked to give scientific presentations around the world. During this time he was a founding member of the Canadian Society of Infectious Disease (now the Association of Medical Microbiology and Infectious Disease Canada). He served as president of the organization from 1984-1985. The association awarded him the distinguished service award in 2004 and the lifetime achievement award in 2010. At the time of his retirement and in recognition of his contribution to the University of Manitoba he earned the title of Professor Emeritus, Internal Medicine and Medical Microbiology. Godfrey was committed to medical education. He took pleasure in teaching medical student, residents and fellows. During his career, he trained and mentored many of Canada’s infectious diseases specialists. He was also a board examiner in Internal Medicine and Medical Microbiology for the Royal College of Physicians and Surgeons. Godfrey spent most of his career at the St. Boniface hospital where he was the Head of infectious disease and medical microbiology. For more than 30 years, until his retirement in 2007, he provided compassionate and outstanding care to all of the patients he saw in his clinic and the hospital. In 2012 Doctors Manitoba awarded him with an Honorary Canadian Medical Association membership. As one final contribution to Manitoba, from 2005 to 2007 he was the Medical Director of Clinical Microbiology, Diagnostic Services of Manitoba and played a leading role in restructuring of microbiology services across Manitoba. Godfrey was a dedicated husband and father. He particularly loved travelling the world with his wife and all of the time spent on the golf course at Southwood together. He was an avid tennis player and enjoyed playing with friends and his sons for many years. No matter how busy he was, he always made time for his family. Godfrey was a scholar and a gentleman. Despite all his accomplishments he was a very humble man. He will be remembered by his thoughtful advice to anyone who would seek it out. He will also be remembered for his quick wit and wonderful smile. We were all truly blessed to have him in our lives. Our family is grateful for wonderful and compassionate care provided to Godfrey in his final years at Misericordia Place, MP3. Due to COVID-19 a Celebration of Life will be held at a later date. Those who wish to remember Godfrey are encouraged to make a donation to support the St. Boniface Research Foundation or Misericordia Health Centre Foundation.
See more See Less