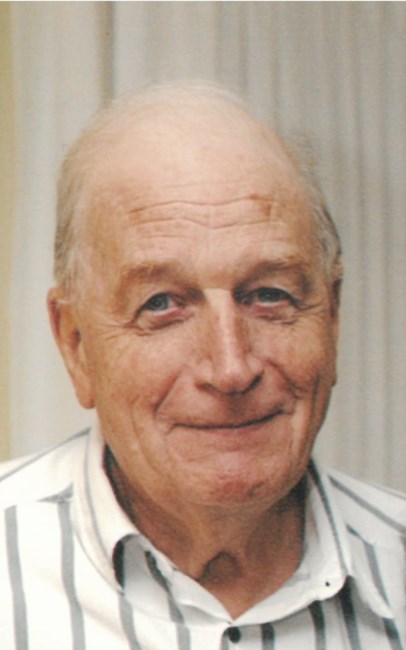 Remembered with Love On September 30, 2021, William James (Bill) Thomson, passed peacefully. Bill was predeceased in 2018 by his loving wife of 70 years, Daphne. He was also predeceased by parents Walter and Julie Thomson and siblings Jack Thomson (Phyllis), Walt Thomson (Wilma), Mary Taylor (Charlie), Jean McLeod (Tom), and Peggy Pinkerton (Ken). He was father to W. Bruce Thomson, Peggy Dopheide (Peter), and K.A. (Sandy) Thomson. He was the proud Grandpa (Gramps) to Lorna Harvey (Elliot), Philip Dopheide (Melissa), Katie Groenheide (Kevin), Bram Dopheide (Mercy), Ben Dopheide (Nicole), and Becky Dopheide. He was also the proud Great grandpa to eleven great grandchildren. Bill was born in Winnipeg, the youngest of six siblings and was raised during the Depression by a single mom after his father passed when he was only nine. Dad had a strong work ethic developed as a young man to help support the family. During his childhood and early teens, he was active in the Cameron Highlander Cadets where he first developed his clear sense of discipline, punctuality, and civility. He was a graduate of Gordon Bell High School, and it was here while performing in Gilbert & Sullivan musicals where Dad first met and fell in love with Daphne MacLean, the future love of his life. After high school Dad subsequently attended the University of Toronto for engineering. After completing his first year of university he enlisted in the Canadian Army. He went through basic training and was two weeks away from shipping out when World War II ended. Returning to Winnipeg after the war, Dad worked briefly with Kip-Kelly Company, a local engineering firm. A better opportunity with Swift Canadian Company led to a 42- year career in the food industry. Dad and Mom tied the knot in 1948, starting an extraordinary 70 years together. Mom often kidded that Dad had married Swifts 2 weeks before her. Transfers and business travel took him from Kenora to Carmen, Toronto to Chicago, and even a few trips to the Caribbean. Dad moved up the corporate ladder throughout his career through hard work and continuing education, earning a Business Diploma at evening classes from the University of Manitoba in his 40s, all while working and partnering with Mom to raise the family. His career ended in 1988 retiring as a general manager with Parrish & Heimbecker. This was followed by a few post-retirement years serving on two national poultry boards where he and Mom were able to travel extensively coast to coast and throughout Canada. Dad was an avid reader and enjoyed coin and stamp collecting. Dad and Mom were also animal lovers, and the family usually had a dog or cat, often both, and the two of them loved the innocent antics of our beloved four-legged family members. Summers were spent at the Thomson family cottage at Dorothy Lake in the Whiteshell. Many happy memories were made with our nearby cousins, the Swanlund’s and the Donald’s. Endless hours were spent lakeside on the dock, swimming, boating, and occasionally fishing for pickerel and goldeye. Dad and Mom were also enthusiastic Bomber fans and went to games regularly, including a couple of Winnipeg hosted Grey Cups and one in Hamilton when the family lived in Toronto. Being a proud Scot, Dad was a member of the St. Andrew’s Society and regularly attended the St. Andrew’s Day dinner for haggis and ‘neeps’, and a few drams of scotch. Later in life Dad became a more regular curler with weekly games at the Granite Curling Club Senator Seniors Men’s League, remarkably curling up to age 90. Particularly memorable trips for Dad and Mom included Great Britain, France, Alaska, Hawaii, Tofino, and in later years annual winter escapes to Victoria. Both were active members in the First Presbyterian church, and their strong faith sustained them in life and strengthened their belief that they would eventually be reunited in heaven. In life, their closeness was obvious to anyone who spent time with them. Whether singing together, dancing at weddings, watching a show beside each other with mom knitting, bedtime chats before sleep, or simply sharing a drink together before dinner, theirs was an extraordinary bond. Dad will be remembered for his great sense of humor, and he was a huge Monty Python fan. Gregarious and outgoing by nature, he was generous of spirit and was always there for friends and family whenever they needed help. His love of laughter, good food, good drink, and good company, whether with family or friends, the sparkle in his eyes reflected his joie de vivre. If you are so inclined, please feel free to raise a toast to his memory – a ‘wee dram’, single malt preferred. Thank you to the Victoria General Hospital 4 North nurses, health care aids, and doctors who looked after Dad and a special thank you to Maggie Clarke and her staff from ExecuCare who provided support and companionship in Dad’s end of life journey. A private family service will take place at a later date. Those wishing to commemorate Dad may consider donations to the Salvation Army Harbour Light, the Heart & Stroke Foundation, or a charity of your choice.
See more See Less