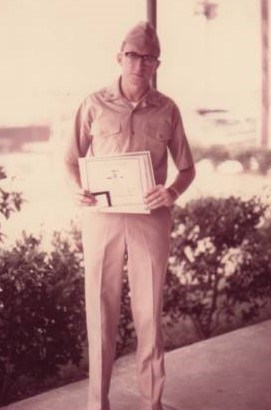 Charles Herman Holder passed away July 31, 2022 at the age of 85. Charles was born on October 28, 1936, in Huntsvilte, Alabama to Harry and Elsie Holder. As a child, Charles was called "Bing" by his family because when he sang and played the guitar, they said he sounded like Bing Crosby. He served in the Navy for 20 years. His time in the service sent him around the world, including multiple tours in Vietnam. After his time in the service, Charles created a football league for the boys in his neighborhood. In addition to his musical talents, Charles was skilled at painting, woodworking, and magic tricks. He is survived by his devoted and loving wife, Judy Gabor of 59 years; three sons and their wives, James (Sandy), John (Cindy), and Timothy (Jill); 13 grandkids; 4 great grandkids; a sister, Nancy Holder Allam, and many nieces and nephews. He is preceded in death by his brothers Harry Jr. and William (known as "Pete"). A Funeral Service will be held on Friday, August 5, 2022 at 9:30 at the Baldwin Fairchild Goldenrod Chapel located at 7520 Aloma Avenue, Winter Park, Florida 32792. Burial will be held the same day, Friday, August 5, 2022 at 10:30 am at Glen Haven Memorial Park located at 2300 Temple Drive, Winter Park, Florida 32789.
See more See Less

In Memory Of Charles Herman Holder