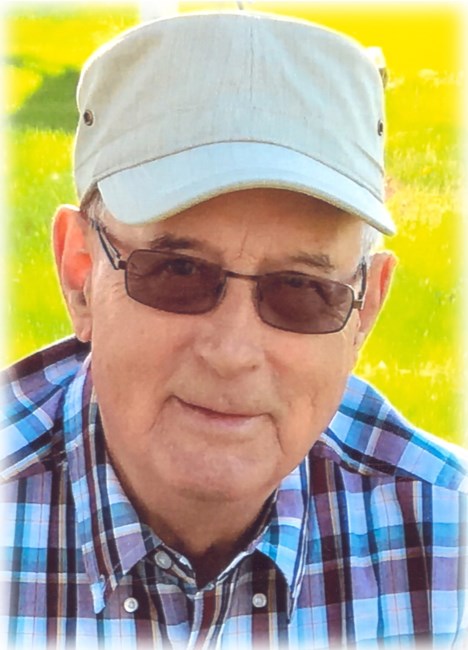 Ivan was born December 31, 1931 to Albert & Fannie Brown in their farm home (which had been newly built in 1931). Ivan took his schooling at Allindale Rural School by riding horseback, driving horse and cutter or riding a motorized bicycle. He took one year of elementary school in Sintaluta School. Ivan lived on the farm on the south side of Qu’Appelle Valley all of his life until 1987 when they moved into Sintaluta. He drove his own gravel truck for building the #1 highway (past Sintaluta area). In 1951, he hauled gravel to Regina when the airport was built. He worked in his brother Alden’s welding shop in Regina. Their motto was “we weld everything but the break of dawn”. He began his farming career with his dad and his brother Orval with cattle & grain. Ivan was married on July 10, 1952 to Mary Thompson (who taught at Allindale School) in Central Butte by Sintaluta’s minister Rev. Keall. Ivan and Mary raised four children: Janet, Judy, Sharon and Les. They farmed with daughter Janet and son-in-law Bert Eisler from 1971 to 1981. In 1984, Ivan and Les began a father-son farming operation until 1997. Ivan developed the gravel pit on his own land. He did gravel work along with farming, then kept the gravel “toys” after moving to town. Ivan built his long awaited dream of a heated workshop on the farm in 1980. It was well used by Ivan and Les over the years. The workshop was built with the help of family, neighbours and friends. In 1987 when Ivan and Mary moved to Sintaluta they bought an RTM ’87 Shriner’s Dream Home and built the basement and double car shed with family’s help. Ivan did his own landscaping in the yard. In 1999, the farm sold and a 40 x 60 steel shed was built in town for storage of gravel equipment, etc. He continued contract work with truck, loader and backhoe until 2007. In 2010, he sold the shed and loader. Ivan and Mary did most things together, making decisions on purchases and farm operations. Ivan served on: Allindale Snow Plow Club-bulldozed, later blew snow for many years in the district, Allindale Rural Telephone Co., Alexander Church Board, Sintaluta United Church Board, Sask. Wheat Pool, Sintaluta Co-op Board, Sintaluta Credit Union (was one of the founding members 1963 #5 Account), Member of Sintaluta Silver Horizons and stage manager/prop manager for Sintaluta Players Drama Club. Survived by his 4 children: Janet (Bert), Judy, Sharon (Kim) and Les (Barb); 12 grandkids; 23 great-grandkids; 2 great-great grandkids; brother-in-law Mac Sheppard and many nieces and nephews. Ivan was predeceased by his loving wife Mary; mother Fannie (Gilstorf) Brown; father Albert S. Brown; brother Howard Alden; brother Orval Albert Brown; brother-in-law Lyle Willoughby; sister-in-law Sophia Brown; sister Evelyn Willoughby; sister-in-law Ivadell Brown and son-in-law Laurie Price. He was also predeceased by Mary’s relatives: (Vaughn) and Lola MacPherson, Ralph and (Ethel) Thompson and Fae Sheppard. Ivan’s hobbies and interests were being at his home with family, keeping a neat yard and garden, being a good farmer, gravelling services, playing with his heavy equipment “toys”, playing pool on his pool table and going to the coffee shop with friends, landscaping, moving and levelling dirt (loved this job). He was so happy in his loader, backhoe or gravel truck. The funeral service was held in St. James United Church, Wolseley, Saskatchewan on Saturday, May 14, 2022 at 2:00 p.m. with Jim Wolff officiating. The family asks that for the safety of everyone, please wear a mask. In lieu of flowers, donations may be made to St. James United Church, Box 465, Wolseley, SK S0G 5H0 or to Sintaluta Cemetery, Box 150, Sintaluta, SK S0G 4N0.
See more See Less

In Memory Of Ivan Brown