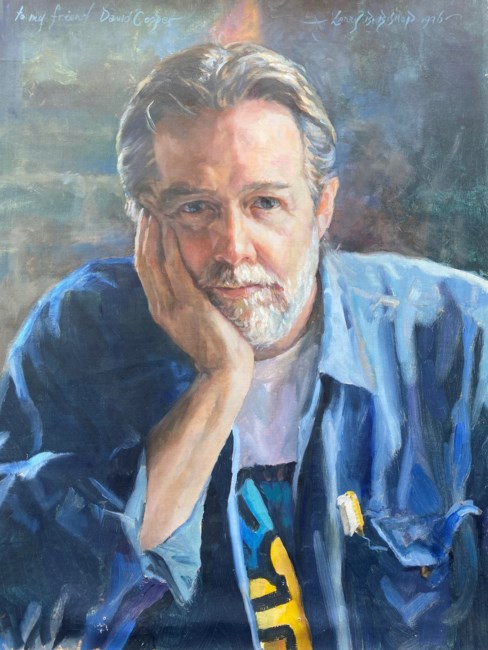 After a long, arduous battle with multiple sclerosis (MS), David Arnold Cooper, 79, passed away Wednesday, July 27, 2022, due to complications related to his illness. Born in Athens, GA, Mr. Cooper was the son of the late Ralph Arnold and Lynda Beatty Cooper. Mr. Cooper always spoke of his childhood with such fondness. He enjoyed spending time with his family and friends and especially loved hanging out at the local YMCA where his father was Athletics Director. In 1963 Mr. Cooper married Nancy Watson of Oak Ridge, TN, graduated from University of Georgia with a Bachelors Degree in Fine Arts in 1966, and welcomed his only child, Ainsley Suzanne Cooper, to the world in 1969. Additionally, Mr. Cooper served his country from 1967-1970 as a Naval Communications Officer during the Vietnam war. Once honorably discharged, Mr. Cooper began his career in advertising. He started by working for an agency in Birmingham, AL where he honed his skills and became more enamored with the industry. Later, he took a position located in Chicago, IL and by 1975, decided to take a bite of the big apple and moved to New York City, NY, where he spent the majority of his career as a Creative Director and enjoyed many exciting years. Mr. Cooper was officially diagnosed with MS in 1992. By the late 1990s it became difficult to maintain the fast pace of Manhattan so he retired and returned to the charms of Alabama. After happily residing in both Springville and Birmingham, AL for many years, he made his final move to Georgia in 2014, thus allowing his daughter to more easily oversee his care. Survivors include sister, Suzanne Cooper-Burnside of Edenton, NC; daughter, Ainsley Suzanne Cooper of Atlanta, GA; and former wife, Nancy Watson Cooper of Atlanta, GA. Per Mr. Cooper’s wishes, he will be cremated and a memorial service may be announced at a future date. In lieu of flowers, Mr. Cooper requested donations be made to one of his favorite charities: National MS Society - nationalmssociety.org American Civil Liberties Union - aclu.org Amnesty International - donate.amnestyusa.org Democratic National Committee - democrat.org World Wildlife Fund - support.worldwildlife.org Fond memories and expressions of sympathy may be shared at www.woodstockfuneralhome.com for the Cooper family.
See more See Less

In Memory Of David Arnold Cooper