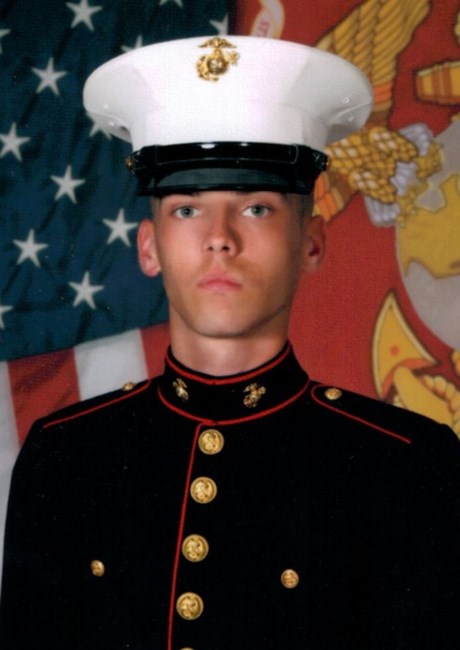 Private First Class Kyle Bowersox, 21, of Marietta passed away September 4, 2015. Kyle was born on December 20, 1993 in Philadelphia, PA. He is a graduate of Lassiter High School. While attending Lassiter, Kyle was in the NJROTC, marching band and managed the girl’s lacrosse team. After graduating, Kyle was a manager for Prestige Valet and worked for Sparkles Roller Rink. It was during this time he was working on putting on enough weight to join the United States Marine Corp. Kyle joined the US Marines on January 5 2015 and was training as an Air Crewman at NAS Pensacola. He came from a long line of proud Marines. Kyle was a natural leader and motivator. He made everyone he met smile and was a very loving and devoted son and brother. He loved motorcycles and cars, especially Mustangs. Kyle is going to be immensely missed by all who knew him. Kyle was preceded in death by his paternal grandmother, Darlene Bowersox and maternal grandfather, Sgt. Howard F. Robertson. He leaves behind his parents, Sgt. Kevin Bowersox and Lynette Bowersox, brother, Colin Bowersox, sister, Heather Hays, nephew, Skyler Hays, paternal grandfather, Larry G. Bowersox, maternal grandmother, JoAnn Mayes and numerous aunts, uncles and cousins. A celebration of Kyle’s life will be Sunday, September 13, 2015 at 3:00pm in the chapel of Woodstock Funeral Home, 8855 Main St, Woodstock, GA 30188. The family will welcome friends after the service at a reception at Marietta Billiards, 1355 Roswell Rd, Marietta, GA. The family will receive friends on Saturday, September 12, 2015 from 11am-3pm and 5pm-8pm at the funeral home. In lieu of flowers, please send donations in Kyle’s memory to the USO, www.uso.org/donate, 6000 N. Terminal Pkwy, Atlanta, GA 30320, 404-761-8061. Arrangements under the direction of Woodstock Funeral Home, Woodstock, GA.
See more See Less

In Memory Of Kyle Bowersox