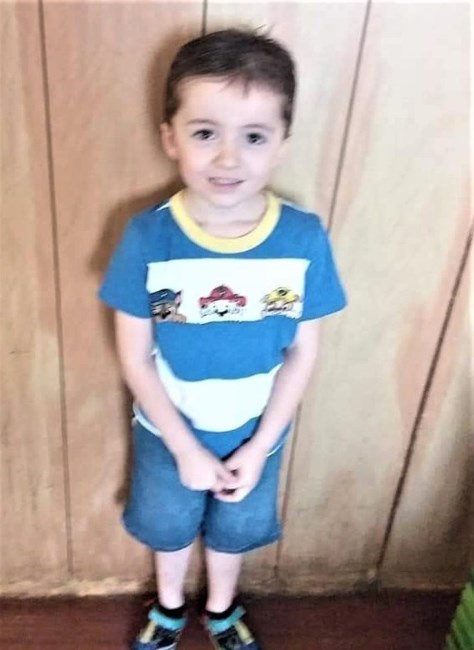 Nathaniel Damian Denton, four years old, passed away Wednesday January 12, 2022 in Yakima, Washington as a result of asphyxiation. Nathaniel was born in Yakima, Washington on August 21, 2017 to Rusty Denton Jr and Saina Everts. He brought much joy and smiles to those closest to him and fulfilled an empty house. He was usually called by his nicknames "Nate Nate" or "Nat Nat". He filled his family's world with sunshine; lighting up a room with his smile and personality that grabbed the attention of those around him. He loved superheroes and Hulk was his favorite. He would look at his dad as though he was his superhero and wanted to be one himself. Nathaniel was a Daddy's and Papa's (Grandpa Sr.) boy. He was always involved in what his dad and Papa were doing and could get away with telling his Papa what to do, in Nathaniel's own sweet way. He loved being outside and would use his toy power drill to help his dad and Papa with their projects; looking for any excuse to use it. There were no boundaries with Nathaniel. His smile melted hearts, which made his family want to share all they could with him. He had a love for the park and ducks. He enjoyed going to the store, picking out his own stuff and putting it in his own bag like Papa did. When his dad would be in the middle of playing online games with friends, Nathaniel would take over and talk to his dad's friends through the headphones. Daddy's friends got such a kick out of him. He was a very smart boy. Love to sing, dance and enjoyed learning videos. He loved seeing videos and photos of himself. It cracked him up. Holding Nathaniel in their arms felt magical; like nothing else seemed to matter. He was loved by all and Papa considered him his best friend. After losing his mother a few months before turning two, Nathaniel's family and relatives doubled the love and attention to make up for the loss. He will be greatly missed. Family was looking forward to seeing him start Kindergarten this year. Instead, they are left with a hole in their hearts that can never be filled. Nathaniel is survived by his dad, Rusty Denton Jr. of Yakima, WA; his grandparents' Rusty Denton Sr. of Yakima, WA, Angela Sage of Yakima, WA, Janise Bills and Branden Cantrell of Yakima, WA; his great grandmother Vickey Cantrell of Yakima, WA; his uncle Joseph (Joey) Denton of Yakima, WA and many uncles, aunts and cousins. He is preceded in death by his mother Saina Everts.
See more See Less

In Memory Of Nathaniel Denton