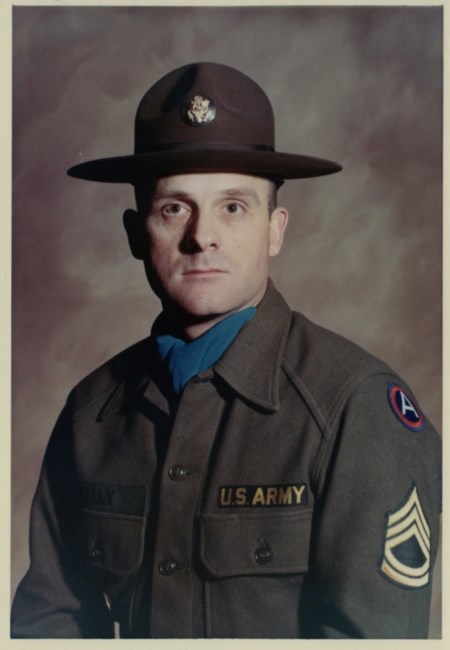 Rudolph William Kelley, 90, went to be with Jesus Christ, his Lord and Savior, on Friday, May 6, 2022, at Blossom Place Assisted Living Home in Yakima. Rudolph (Rudy) was born in Follett, Texas and was the oldest of two sons of Rudolph (Bill) and Eunice (Adrian) Kelley. He attended school in Toppenish and graduated from Toppenish High School in 1950. Shortly after graduating from High School Rudy enlisted in the U.S. Army. In 1951 he served his first of two tours in Korea as a Scout, riding backwards in a O-1 “Bird-Dog” airplane observing the land below. After Korea he was stationed at Vashon Island and then was discharged from service in 1952. Rudy went to work for Douglas Aircraft in California but quickly discovered that civilian life was not for him and reenlisted into the U.S. Army. In 1952 he was stationed in Germany and would be part of the Buffalo Soldiers in Mannheim and was assigned as a Tank Mechanic. He often commented on the unreliability of the Half Track which would break down as soon as it left the post gate while on training maneuvers. In 1958 Rudy was deployed to Beirut, Lebanon during the Lebanese Civil War. After that deployment he was stationed at Fort Lewis, WA and in 1959 was briefly assigned to Cold Weather Mountain School in Alaska which he didn’t enjoy — too cold! In 1962 Rudy was assigned to the infamous “Checkpoint Charlie” on the Berlin Wall, observing the newly isolated East Berlin guards. That year he would also find himself deployed once again to Korea. Upon his return from Korea he was stationed with the 2nd Armored Cavalry in Bindlach, Germany. While stationed in Germany Rudy met the love of his life, Gertrude Haas. They were married on September 21, 1956 in Alzey, Germany and would spend the next 62 years together. Rudy and family traveled as often as they could and visited all parts of Germany, as well as Luxemburg and France in their 1964 VW. He fell in love with Germany and enjoyed its culture, food and music for the rest of his life. In 1966 Rudy was reassigned to Fort Campbell, KY as a Drill Sgt. One year after the birth of his daughter Cynthia in 1967 Rudy received deployment orders for Viet Nam and was shipped out in 1968, just as the war was escalating. While there, he served with the 7th Squadron/1st Air Cavalry — “Blackhawks” as a scout in a Light Observation Helicopter (LOH). Simply stated, his job was to fly as close to the tree tops and rice fields as possible to scout out the enemy, which were often located by gunfire rather than visual contact. As Platoon leader in Viet Nam, Rudy was proud of the fact that he never lost one of his soldiers during his tenure with the Blackhawks. After his time in Viet Nam Rudy requested to be stationed in Germany but was assigned to Fort Knox, KY. It would be his last assignment before he retired in 1971 after a 20-year military career. In 1971 Rudy and family moved to Yakima where he got a job at Bowden’s Auto Parts store and for the next 22 years, he was a counter sales clerk, retiring permanently in 1993. Rudy was an avid gardener and passionately spent hours raising vegetables in his large garden, nurturing his fruit trees, or tending to his flower beds. He was an avid lover of history books and would wake up at the crack of dawn to read his books about WWII or other military conflicts. He loved German music, particularly polka, and actually took accordion lessons later in life. He played the harmonica and appreciated the “fiddle” and the music of the Appalachian culture. His sense of humor was incredible and he loved a good joke. He adored his grandson Mike Kelley and enjoyed playfully bickering about sports or other goofy topics with him. Rudy loved his country and was extremely proud of his service in the U.S. Army. He was a proud member of Bethlehem Lutheran Church and was a devoted Christian. Rudolph bravely fought cancer for almost 30 years. He was never afraid and always tackled the illness as an enemy to be conquered. He was a soldier to the end. Rudolph is a recipient of the Bronze Star, the Air Medal, Army Commendation Medal, Army of Occupation Medal-Germany, National Defense Service Medal, Korean Service Medal, Armed Forces Expeditionary Medal, Vietnam Service Medal, United Nations Service Medal, and the Ambassador for Peace Medal (from the nation of South Korea). Rudolph was predeceased by his wife Gertrude on February 8, 2019, his daughter Cynthia “Cindy” Kelley in 2013, and grandson Brian Kelley Jr. He is survived by his son Brian (Suzan) Kelley, brother ER (Louise) Kelley, his grandchildren Mike Kelley, Samantha (Evan) Burch, Natalie (Justin) Riley, Vanessa (Patrick) Porter, Alex (Heather) Kelley, and Gavin Kelley as well as several nephews and great-grandchildren. The family would like to thank the staff of Blossom Place of Yakima for the loving care that they took of Dad during his last few months on earth. He is now in heaven with his beloved wife Gertrude, daughter Cindy, and grandson Brian — all in the presence of our Lord. Visitation will be held on Monday, May 23, 2022 at Keith & Keith Funeral Home from 4:00 until 8:00 p.m. Funeral services will be held at Bethlehem Lutheran Church, 801 Tieton Dr., Yakima on Tuesday, May 24, 2022 at 1:00 p.m. Interment will follow at Terrace Heights Memorial Park with military honors. Fond memories and expressions of sympathy may be shared at www.keithandkeith.com.
See more See Less