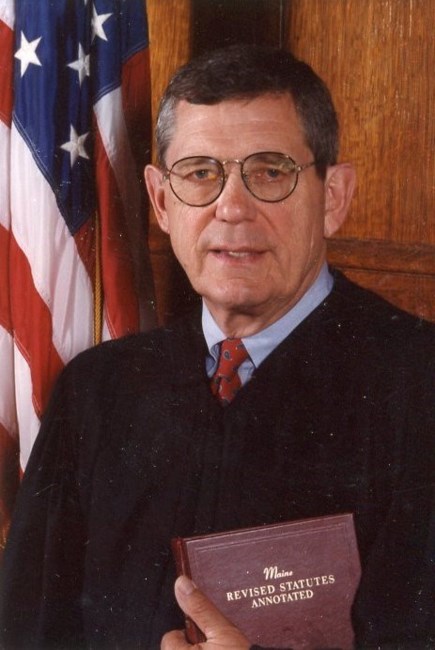 Carl O. Bradford, Yarmouth, Maine Retired Justice, Maine Superior Court Yarmouth, ME- Judge Carl O. Bradford passed away peacefully on March 29, 2020 at the age of 87. Born on November 16, 1932 in Dallas, Texas, Carl was the second son of Montie Leroy and Vivian Ila Milam Bradford. He spent his early childhood in Waco, Texas. The family moved frequently during WWII as his father, a lineman-electrician, helped build Manhattan Project sites at Los Alamos, Hanford, and Oak Ridge. The family settled in Detroit, Michigan after the war; Carl graduated from Southeastern High School in 1950. Carl entered the US Navy Reserve in 1951, was called to active duty in 1953, and was stationed at the Brunswick Naval Air Station. He married Claire Chaloux of Lewiston, Maine in 1955 and started a family while working and going to college at the University of Detroit on the GI Bill. Judge Bradford entered law school in 1959 and led the first class to graduate from the University of Maine School of Law in 1962. After passing the bar, he worked in the Maine Attorney General’s Office before joining the Paul Powers Law Firm in Freeport. He became a partner and practiced law as a trial attorney for over 17 years. Carl served his community in many ways, including little league coach, trustee of Freeport’s B.H. Bartol Library, Commodore of the Harraseeket Yacht Club, and various positions in the Cumberland County Bar Association, the Maine Bar Association and the Maine Trial Lawyers Association. Judge Bradford was committed to service to his profession, to enriching the lives of others, and to extending the mentorship and opportunities he had received to those generations coming after him. The family settled in South Freeport in 1965. However, tragedy struck when Carl’s wife, Claire, died suddenly in December 1972, leaving him with three teenaged children: Timothy, Kathleen, and Elizabeth Ann. Carl met and married Mary Ellen Sanborn Manson of Yarmouth, a widow with two young children, Bethany and Michael, in 1973. The family lived in South Freeport until 1977, when they moved to a home on Cousins Island in Yarmouth where Carl’s family lived for over four decades. Carl’s wife, Mary Ellen, died after a brief illness in December 2016. Judge Bradford’s contributions to the practice of law have been significant and far-reaching. As a trial attorney, he set several legal precedents, most notably Davies v. City of Bath (Me. 1976), abolishing state Sovereign Immunity for tort in Maine. In 1981, Judge Bradford was appointed to the Maine Superior Court. During his tenure, he presided over a number of high-profile cases. He later used that wealth of experience in his work as an Active Retired Justice (ARJ), becoming much sought after for his mediation skills. For a number of years as an ARJ, Carl was very successful in helping litigants and lawyers find ways to settle complex cases that others had considered unresolvable short of trial. Over the course of his career, Judge Bradford served on the Board of Governors and as President of the Maine Bar Association; member of the Board of Governors and House of Delegates of the American Bar Association; and served on numerous commissions and committees. He was also a member of the Board of Trustees and Chair of the National Judicial College, and testified before the U.S. Congress on judicial immunity legislation. Judge Bradford was a true Renaissance man whose talents went far beyond the courtroom. His sense of humor was legendary; he always delighted in making others groan at his horrible puns. Carl was known for his love of early jazz and frequently played gigs around the state with his band, Port City Jazz, as lead vocalist and trumpeter. He hosted a weekly jazz show on WYAR. Carl’s paintings and silkscreen art adorned many homes of family and friends. For over twenty years he created the family silkscreened Christmas card. Photography was also a great passion, and he never missed an opportunity to document family gatherings, grandchildren’s sports endeavors, and travels that he and Mary Ellen enjoyed. Carl was well known in the Yarmouth community to be a dedicated fan of his two youngest grandchildren’s various sporting events. He could always be counted on being along the side lines, and in the ice rinks conversing with other parents and cheering them on. Judge Bradford is survived by his five children and six grandchildren: son Tim and wife Donna of Lake Worth, Florida (Michelle and Casey); daughter Kate and husband Ken Kaufman of Potomac, Maryland; daughter Betty Ann and husband Jim Listowich of Kingfield, Maine (Ben and Emily); daughter Bethany Bradford, DVM, of St Croix, US Virgin Islands; and son Michael and wife Angela of Yarmouth, Maine (Olivia and Sam). The family is deeply grateful to the staff at Bay Square Assisted Living Community in Yarmouth for their attentive, professional, and loving care, and to Compassus Hospice and Friends in Home Care for their additional support during his final days. In lieu of flowers; please consider a donation in his name to a charity of your choosing. Due to the extenuating circumstances of these times, there will be a celebration of life at a future date. Please visit www.lindquistfuneralhome.com to sign Judge Bradford’s online guest book.
See more See Less

In Memory Of Carl O. Bradford