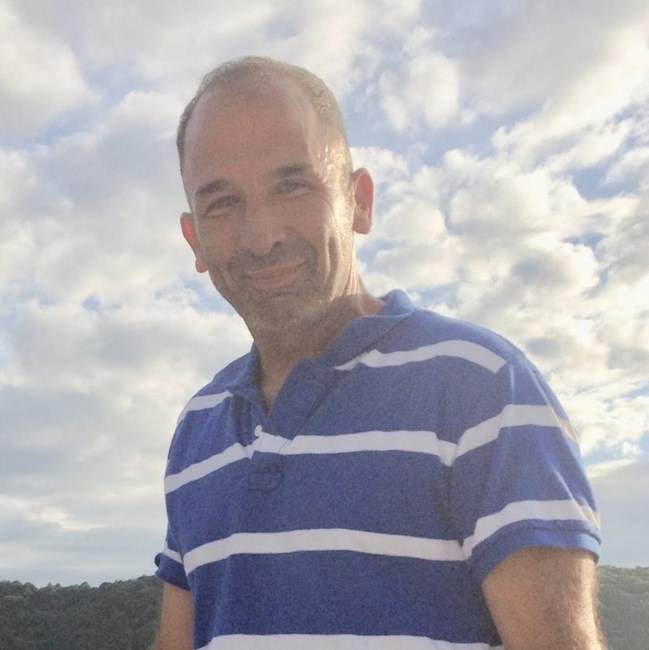 Eduardo (Eddie) Rivera of Poughkeepsie NY passed away on July 25, 2020 at the age of 63 after a long and courageous fight with Pancreatic Cancer. Eddie passed peacefully at home with his loved ones at his side. Eduardo Antonio Rivera was born in Santa Clara, Cuba on October 13, 1956 to Romelio and Isabel Rivera. Eddie and his brother, Wilfredo, took one of the last flights out of Cuba with their mother, joining his father who awaited them in Florida in 1961. His family moved to New York a short time later where he attended Incarnation Elementary and Cardinal Hayes High School, graduating in 1975. Eddie obtained a Bachelors of Science in Spanish from St. John’s University in Queens; and, a second Bachelors in Physical education from City University (Herbert Lehman College) where he also served as an adjunct professor. Eddie was an accomplished long-distance runner in college and later went on to run the New York City Marathon. Additionally, he had the honor of carrying the Olympic torch on its journey to the 1980 Opening Ceremonies in Lake Placid. He worked 9 years in the Hyde Park School District where he continued his life-long love of teaching. He had many talents and skills. He became one of the first paramedics in Dutchess county. His energy and relentless quest for excellence earned him the respect of all who knew him. He later joined the Yonkers Fire Department, from which he retired in 2013. During his 26 years as a firefighter he won numerous awards for his work. Eddie had the honor of serving as a First Responder during the 911 crisis working at Ground Zero. His fellow firefighters—always referred to as his “brothers”—became his extended family. Countless numbers of this firefighter brotherhood supported him, and visited him, throughout his extended illness and in his final days. All that knew Eddie know he was the most principled, passionate, energetic and genuinely honest person. He also, loved athletics and the outdoors. He played basketball, baseball, softball and was an accomplished skier serving on Hunter Mountain’s Ski patrol for 12 years. He practiced martial arts, obtaining his second degree black belt in Tang Soo Do; Eddie loved to sail and shared his love by teaching sailing at Adirondack Mountain Club in Fire Island. After retirement Eddie learned to play tennis and become a range safety officer and enjoyed target shooting with friends. Eddie is survived by his mother, Isabel Cirera in Florida; long time partner, Amy Jordan, at home; his children Darian and Lyris; his son Landon, his wife, Nathalie, and their children Nolan and Leona; his stepchildren Jake, Shelby and grandson Logan; his brother Wilfredo and his wife Rossanne and their children Will, Catherine and Rose Angelica. He is predeceased by his father Romelio. In accordance with Eddie’s wishes, there will be no calling hours or services. Arrangements are being provided by Whalen and Ball Funeral Home, Yonkers, NY. Eddie’s ashes will be released at sea off the coast of Key West, Florida. In lieu of flowers, memorial donations may be made to Sparrows Nest, and Voices of 911.
See more See Less

In Memory Of Eduardo Rivera