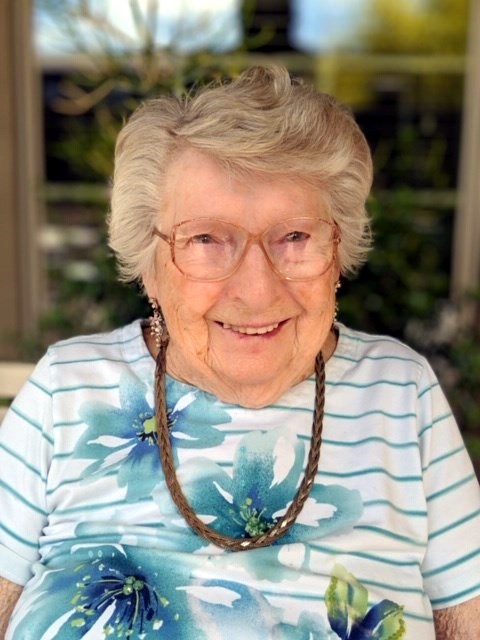 Virginia “Virg” Dawidczyk was a caring wife, mother, grandmother, sister, and friend. She left this world peacefully in her home on September 15, 2022 at age 100. She was born on January 21, 2022 in Chicago, IL to Polish immigrants, the late Stanley and Mary (Switaj) Lukasik. Virg married her sweetheart in 1946, Stan Dawidczyk, after he returned home from World War II. Together they had one daughter, Diane, and moved from the city of Chicago and made a home for themselves in Des Plaines, IL. They lived in that home until Stan retired in 1979. They chose to spend their retirement years in Sun City, AZ. Virg loved all types of music and dancing! She was dancing any chance she got, and especially loved the Polka. Gardening was a passion of hers, making her yard so beautiful. She also hosted many parties on holidays and birthdays and family could feast on traditional Polish food. Virg also enjoyed bowling, bridge and spending time with friends. She continued to bowl until she was 97. Virg was always the life of the party. Early in her retirement in Arizona, Virg volunteered at an animal shelter taking of care of the needs of the dogs that lived there. She also volunteered at a nursing home during their social hours where she sang and danced for the residents. Generously, giving out hugs to all. Virginia is survived by her daughter, Diane Bauman (Stephen), her beloved grandchildren, Chad Bauman and Lydia Bauman, all from Phoenix, AZ, along with many dear nieces and nephews from all over the country. She was preceded in death by her husband, Stan and her brothers, Stanley, William, Theodore, Frank and her sisters, Rose, Bernice, Lorraine, Stella, Mary and Dorothy. Virginia will never be forgotten but forever remembered and missed by all who were fortunate enough to know her. Rest in Peace. Fond memories and expressions of sympathy may be shared at www.AdvantageGoldenDoor.com for the Dawidczyk family.
See more See Less

In Memory Of Virginia A. Dawidczyk