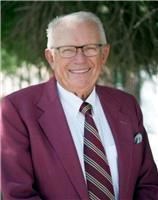 Stephen Philip Shadle was born on July 18, 1936 in Estherville, Iowa. Steve went to be with the Lord and his beloved wife Bobbie on August 11, 2020 at the age of 84 after a fight with cancer. Steve grew up in Iowa graduating from Estherville High School in 1954. He loved sports, playing football, basketball and golf, as well as being on the debate team. He then went on to University of Iowa, where he met Bobbie who would later become the "Sweetheart of Sigma Chi" and his wife. In 1958, Steve received a Bachelors of Art degree from State University of Iowa where he was president of Omicron Delta Kappa, an academic fraternity. In 1960, he received a Bachelor of Laws from the Iowa Law School where he was president of Phi Delta Phi Fraternity, a legal fraternity. Steve and Bobbie married September 8, 1957. Their first child, Scott was born in Iowa City. They moved to Phoenix in 1960 where they welcomed their second child, Wendy. Steve joined the Trust Department at Valley National Bank. His job took them to Tucson in 1961; however their stay was short there too and they moved to Yuma in 1963. Steve wanted to practice law and jumped at an opportunity to join the firm of Westover, Copple, Keddie and Choules. Soon after arriving in Yuma they went to the hospital to have their third child which to their surprise ended up being twins, Baby A and B who turned into Amy and Beth. Steve and Bobbie loved Yuma. They had found their home. Steve continued to practice law until his death with his partner Trevor White and long time paralegal Jody Dyson. His affiliations included U.S. District Court, State Bar of Arizona, State Bar of California, State Bar of Iowa, Supreme Courts of California, Iowa, Arizona and the United States Supreme Court. He has been the past president of the National Council of Agricultural Employers, Washington, D.C. Past president of Yuma Union High School. Past president of Arizona Coliseum Commission. Former member and President of the board of Arizona Western College. Co-founder of the Yuma Community Foundation and Advisory Board member. While Steve loved to practice law, he also loved business. Steve was an advisor to many and an active participant in the formation of many companies. Steve became involved in both the lemon and medjool date business in the late 1960's. He was able to combine his childhood love of farming, his legal and business talents as both of those industries grew over the years. He represented citrus growers on the Lemon Administrative Committee and the Orange Administrative Committee. That led to a period where he did quite a bit of lobbying in Washington DC. He helped form the Bard Valley Medjool Date Growers Association and later co-founded Datepac in Yuma, which is the largest packer of Medjool Dates in the country. Farming continued to be a big part of his focus until his death and will continue to grow as part of his "100 year plan." But banking was still in his blood. In 1982, Steve and several other friends started Southern Arizona Bank. John Byrd and Steve became lifelong friends as they built the bank. Steve was Chairman until the sale of the bank in 1996 to National Bank of Arizona. Later, Steve became involved in 1st Bank Yuma, where he served as Chairman. He expanded his investments over the years to include commercial real estate development, a title company, a gas station and the formation of a computer distribution company. He loved business and sat on many local company boards or acted as an advisor. Steve loved life. He loved golf and his Yuma and San Diego golfing buddies. One of his greatest frustrations with his cancer was it was going to break his streak of shooting his age at 8 years as well as end his hole in one count at 5. He loved flying planes, driving cars and operating boats. He loved both fast cars and old cars and did the Great Race Across America twice. He and Bobbie loved to spend time in San Diego on the Lemon Twist with family and friends. He also enjoyed being part of the Barbershop and the Presbyterian Church in Yuma. Steve and Bobbie valued their community and charitable organizations. The Chamber of Commerce, Red Cross, Caballeros de Yuma, GYEDC, Rotary and countless other groups that helped make Yuma a better place. In 2009 they were awarded by the Heart of Yuma as the philanthropist of the year. The Shadle Foundation and the Shadle Charitable Trust will continue their legacy in Yuma for years to come. Steve loved his kids and grandkids. He loved to support them in their endeavors. This support often expanded to other family friends. Education was important to him and he supported all his kids and grandkids as they progressed through high school and college. He is survived by his four children, Scott (Kathy), Wendy Spencer (Doug), Amy Gill (Pete) and Beth Shadle (Shannon), brothers George and Mark and his 8 beloved grandchildren: Lauren Colvin, Matthew Shadle, Michelle Kozak, Christopher Watson, Sarah Gill, Rebecca Gill, Abigayle Gill, and Thorne Spencer. He was preceded in death by his wife, Bobbie and his parents Freda and Francis Shadle. Steve was a wonderful husband, brother, father, grandfather and friend for many. We will celebrate his and Bobbie's life as soon as it is safe to do so. We have been asked if there is a special charity in his honor. In lieu of flowers, please consider The Shadle Family Foundation that Steve and Bobbie established in 2018. It provides scholarships and grants to Yuma area students and nonprofits. ( Please send to Amy Gill at 1451 South Hettema Street, Yuma, AZ 85364.
See more See Less

In Memory Of Stephen Phillip Shadle